"They attack us politically and then they send officials to deal with us under the table, especially the security, including your [the Australian] government," Assad was quoted as saying. 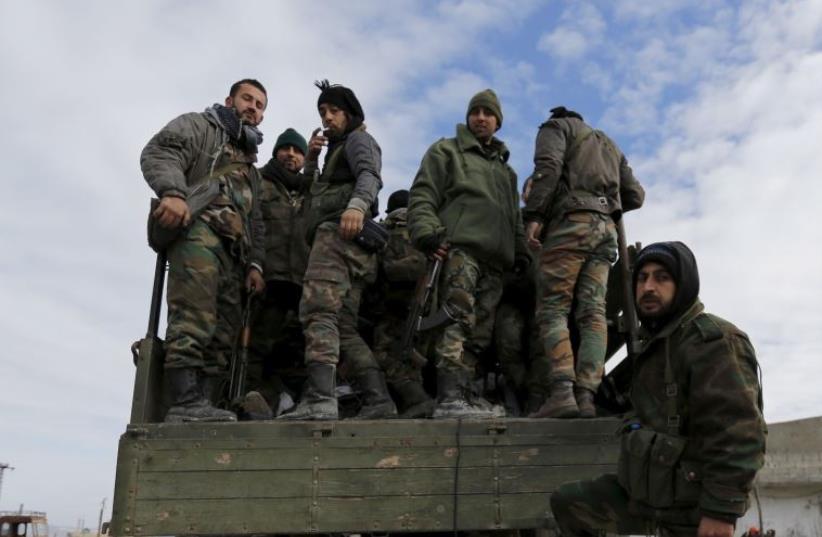 Forces loyal to Syria's President Bashar al-Assad stand on a military truck in the town of Rabiya
(photo credit: OMAR SANADIKI/REUTERS)
Advertisement
AMMAN - Syrian President Bashar Assad said in an interview to be broadcast on Friday that Western countries had sent security officials to help his government covertly in fighting Islamist militants involved in Syria's war.Assad, in remarks to Australia's SBS News channel that were carried by Syrian state media, said Western states - who are strongly opposed to his rule but also face the threat of Islamist attacks at home - were secretly cooperating with his government in counter-terrorism operations."They attack us politically and then they send officials to deal with us under the table, especially the security, including your [the Australian] government," Assad was quoted as saying."They don't want to upset the United States. Actually most of the Western officials, they only repeat what the United States want them to say. This is the reality," he said.There was no immediate comment from Western governments.Western powers have supported rebels fighting to overthrow Assad in a civil war now in its sixth year, and have called for him to step down to ease a future democratic transition. He has refused, vowing to fight on until Damascus regains control of all of Syria. His main allies have been Russia and Iran.Among Assad's foes in the conflict are Islamist militant groups with which radicalized European Muslims have trained and taken part in fighting before, in some cases, returning to Europe to carry out attacks.