At least 23 killed in explosion in Syria's Idlib

The Syrian Observatory for Human Rights said the explosion targeted the headquarters of a minor rebel faction in Idlib. 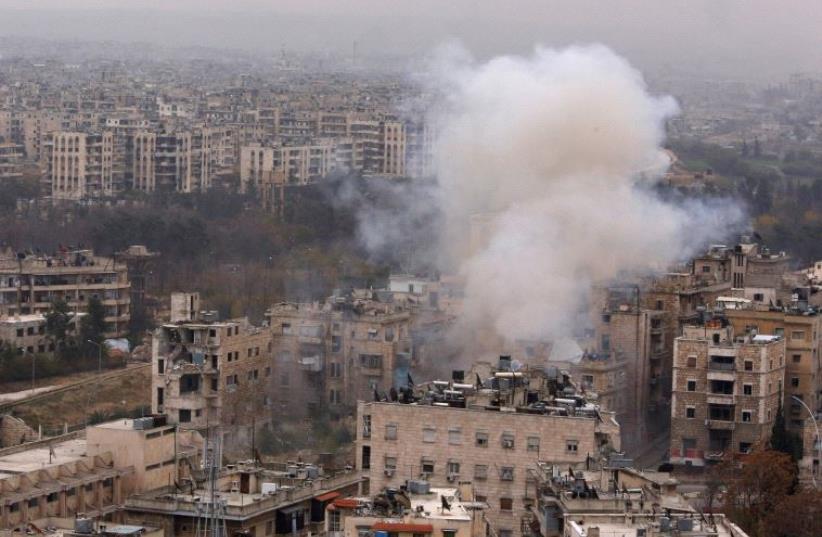 Smoke rises near Bustan al-Qasr crossing point in a government controlled area, during clashes with rebels in Aleppo, Syria December 5, 2016
(photo credit: REUTERS)
Advertisement
BEIRUT - An explosion in Syria's northwestern city of Idlib killed at least 23 people and injured tens more, including civilians, a war monitor reported on Sunday.The Syrian Observatory for Human Rights said the explosion targeted the headquarters of a minor rebel faction in Idlib.The nature of the attack was not immediately clear. The monitor said there were conflicting accounts, attributing the explosion that shook the Thalatheen district of the city to either a car bomb or a drone attack.Ambulances were deployed to the explosion site and rescue teams were continuing efforts to recover bodies and the injured from the rubble of the targeted building and neighboring houses, the monitor added.The majority of the deaths were fighters from the rebel group, in addition to seven civilians, with several people still unaccounted for, it said.Idlib province is a stronghold of rebels in Syria and is situated on the border with Turkey, one of the main backers of rebellion against President Bashar al-Assad.The Syrian army and its allies launched an offensive in October to recapture the provinces of Idlib and Hama, and it has since been making swift advances.The main rebel force in Idlib is Tahrir al-Sham, spearheaded by the former al-Qaeda affiliate in Syria previously called Nusra Front.The Syrian army lost Idlib to insurgents when the provincial capital fell in 2015. It became the only province fully under opposition control.