Earlier on Wednesday, gunmen opened fire at a meeting of prominent Muslim clerics in the southern province of Helmand, killing at least seven people 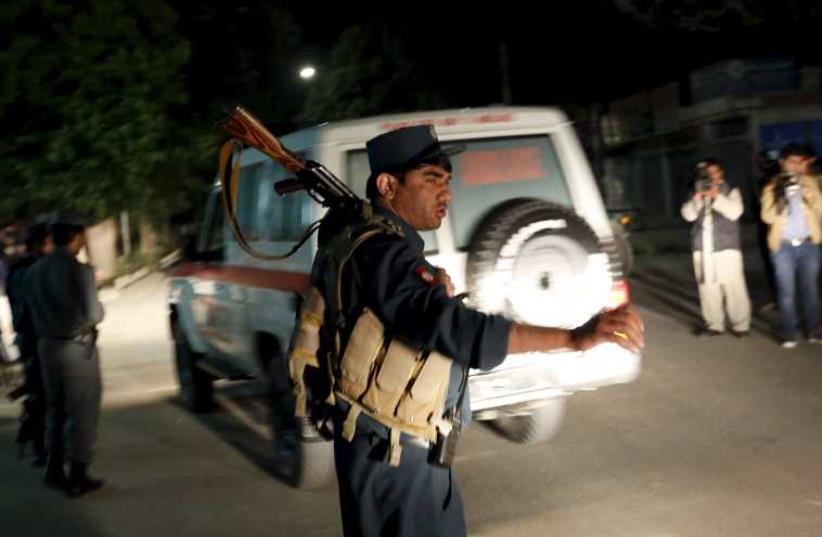 Afghan policeman stands guard at the site of an attack in Kabul
(photo credit: REUTERS)
Advertisement
Gunmen stormed a guest house popular with foreigners in the Afghan capital on Wednesday evening, killing at least five people including an American and two Indian citizens, officials said.Authorities cordoned off the area around the Park Palace guest house in Kabul's Kolola Pushta area immediately after the attack began, at around 8:30 pm local time (1600 GMT).The attack ended about five hours later as ambulances raced out of the area.The brutal assault was reminiscent of two attacks by Taliban fighters in Kabul last year, one on a restaurant and another on a hotel.Kabul Police Chief Abdul Rahman Rahimi told reporters early on Thursday morning that at least five people had been killed and five wounded in the attack. He said police shot dead one attacker but gave few other details.A spokeswoman for the US Embassy confirmed that one American was killed in the attack.At least two Indian nationals were also killed and three who had lived at the guest house were rescued and sheltering at the Indian Embassy, a diplomat said.No one immediately claimed responsibility for the attack.Rahimi said at least 44 people who had been trapped inside the guest house - some there for a music concert, others who had been having dinner - were rescued by police and special forces.Kolola Pushta, home to several international guest houses and hotels, is near both the Ministry of Interior and the Indian Embassy.Last year in Kabul, Taliban gunmen killed nine people - including three children - dining at a restaurant in the upscale Serena Hotel. Two months earlier, attackers stormed into a popular Lebanese restaurant and gunned down 21 people including three United Nations staff and a senior IMF official.Earlier on Wednesday, gunmen opened fire at a meeting of prominent Muslim clerics in the southern province of Helmand, killing at least seven people, police official Jan Aqa said.The Ulemma Council, the highest religious authority in a deeply conservative country, had repeatedly announced its support for security forces fighting the hardline Islamist Taliban insurgents.The Taliban have stepped up attacks since they announced their "spring offensive" last month, after most foreign forces pulled out at the end of last year, and claimed responsibility for the Helmand assault.Ousted from power in 2001, the Taliban have been fighting to bring down the US-backed government in Kabul.