Farsi speakers are not pleased with the Prime Minister's new campaign. 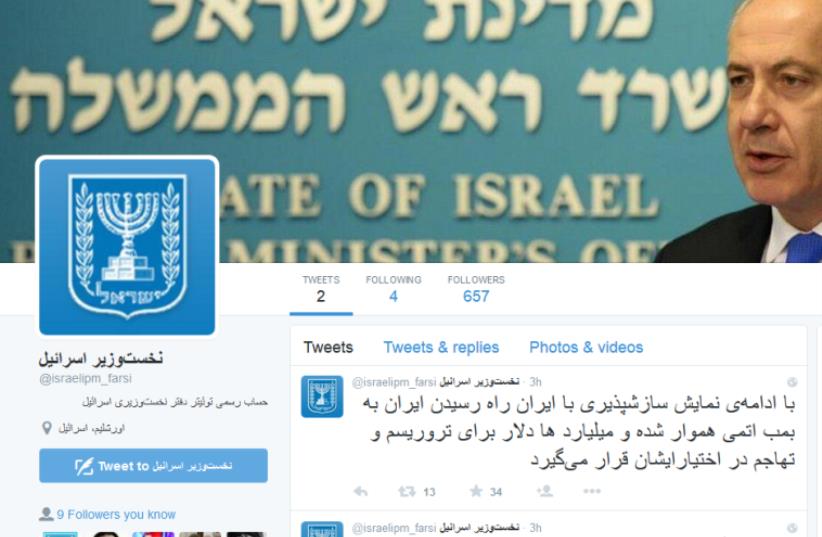 Prime Minister Benjamin Netanyahu opens Twitter account in Farsi
(photo credit: TWITTER)
Advertisement
Prime Minister Benjamin Netanyahu took his crusade against the Iranian nuclear negotiations to the next level on Monday by opening an official Twitter account in Farsi.The Twitterverse didn't take well to the @IsraeliPM-Farsi account. In under two hours Netanyahu had over 600 followers and with just two tweets in Farsi, he garnered hundreds of Farsi curses in response,  according to reports by Foreign Policy.

The prime minister tweeted, "With the continuation of the show of compromising with Iran, the path to Iran getting a nuclear bomb is paved, and they are being given billions of dollars for terrorism and invasion.”Farsi speakers lashed out at Netanyahu, suggesting that he gouge out his own eyes and that he and his cabinet should "suck Iranian ****." An Israeli official said Netanyahu aimed to persuade ordinary Iranians they stood to lose from a deal that limits, but does not eliminate, Tehran's nuclear program because "the more the regime feels strong and impervious to foreign pressure, the more it increases domestic oppression."
Iranian journalist thinks the nuclear talks will fail
Israel, not a party to the negotiations with Iran, has tried with little effect to get the terms imposed on its arch-foe toughened up. The talks, held in Vienna, appeared close to yielding a deal ahead of a midnight deadline.