"At this stage it's not clear that Iran is ready to make the choices," says official on condition of anonymity. 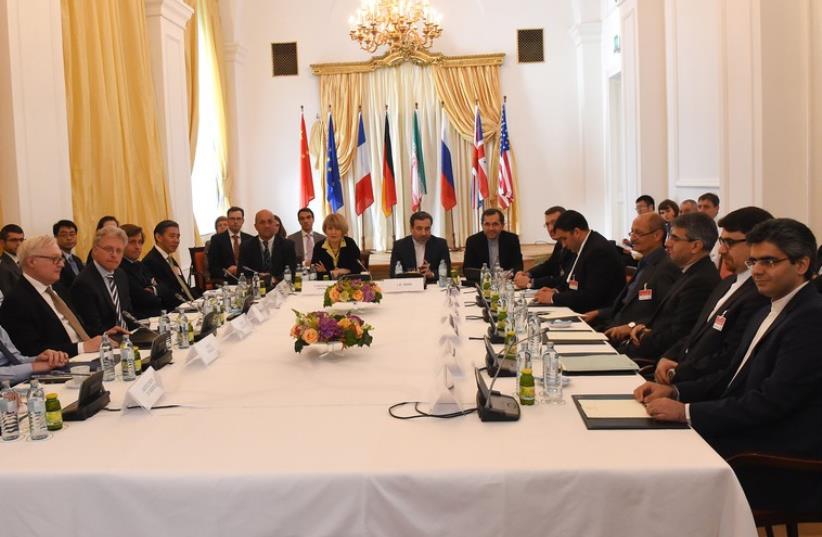 Representatives of EU, US, Britain, France, Russia, Germany, China and Iran meet for another round of the P5+1 powers and Iran talks in Vienna, Austria on June 12, 2015.
(photo credit: AFP PHOTO/JOE KLAMAR)
Advertisement
VIENNA - As a June 30 deadline for a final nuclear deal approaches, major differences remain between Iran and world powers on several key issues including sanctions relief and UN access to Iranian sites, a senior Western diplomat said on Friday."The most difficult subjects need to be resolved in the coming days," the diplomat told reporters on condition of anonymity in the Austrian capital, where talks between the United States, Britain, France, Germany, Russia, China and Iran have entered their final phase."The questions of access and transparency, PMD (possible military dimensions (to Iran's nuclear activity) and sanctions remain extremely problematic. We can find an agreement on some points, but on major issues there are still big differences."Iran and six major powers set themselves an end-June deadline for a long-term deal that would lift sanctions crippling the Iranian economy in exchange for limits on Tehran's nuclear program that would remain in place for at least a decade. But diplomats said the talks would likely run into July.Senior Iranian negotiator Abbas Araqchi told Iranian reporters that the current negotiations were a "slow and difficult process."But despite the major obstacles to overcome, a senior US official suggested to reporters on Thursday that an agreement could be within reach."Despite these tough issues, here's really what it's all about. We can truly see a path forward that gets us to a very good agreement here. We know what the pieces of it are," the official said on condition of anonymity.Western and Iranian officials say the chances of success in Vienna are greater than the likelihood of failure. But there is still no guarantee they will get a deal."The next few days will be extremely difficult. There will be overnighters and we will need to keep calm and have a lot of energy," the senior Western diplomat said. "At this stage it's not clear that Iran is ready to make the choices."US Secretary of State John Kerry arrived in Vienna on Friday, still on crutches after his May 31 cycling accident.Iranian Foreign Minister Mohammad Javad Zarif was due to arrive on Saturday morning, when he and Kerry were to meet to discuss progress and sticking points in the talks. Also arriving on Saturday is French Foreign Minister Laurent Fabius.British, German, Russia and Chinese ministers are expected to join in the coming days as well, along with European Union foreign policy chief Federica Mogherini.VAST DIFFERENCESThe difference on some issues are vast.Officials close to the talks say they have yet to agree on the speed and scope of lifting sanctions, how Iran will reduce its stockpiles of low-enriched uranium, the future extent of Tehran's enrichment-centrifuge research and development program, and access for UN inspectors to military and other sites, as well as UN access to Iranian nuclear scientists.Iran wants sanctions lifted immediately, though diplomats say they will be eased gradually in accordance with a schedule and only after confirmation that Iran has met its commitments.Iran rejects allegations from Western powers and their allies that it is seeking the capability to produce nuclear weapons under cover of a civilian atomic energy program.The real deadline is not June 30 but July 9, diplomats say.The US delegation must present the deal to Congress by July 9 if a mandatory congressional review period before President Barack Obama can begin suspending sanctions is to be limited to 30 days. After July 9, the review will last 60 days, according to a law passed recently by US legislators.Negotiators involved in the talks fear that such a lengthy delay, which would also hold up the cancellation of United Nations nuclear-related sanctions by the UN Security Council, would be too long and would create the opportunity for any deal agreed in Vienna to unravel.While the bulk of any deal agreed in Vienna will be made public, the Western diplomat said elements of the agreement would be kept confidential. The senior US official said, however, that Congress would have access to all aspects of any agreement hammered out in Vienna.