According to a new al-Qaida video, Hamza Bin Laden praised the stabbing attacks by Palestinians against Israelis. 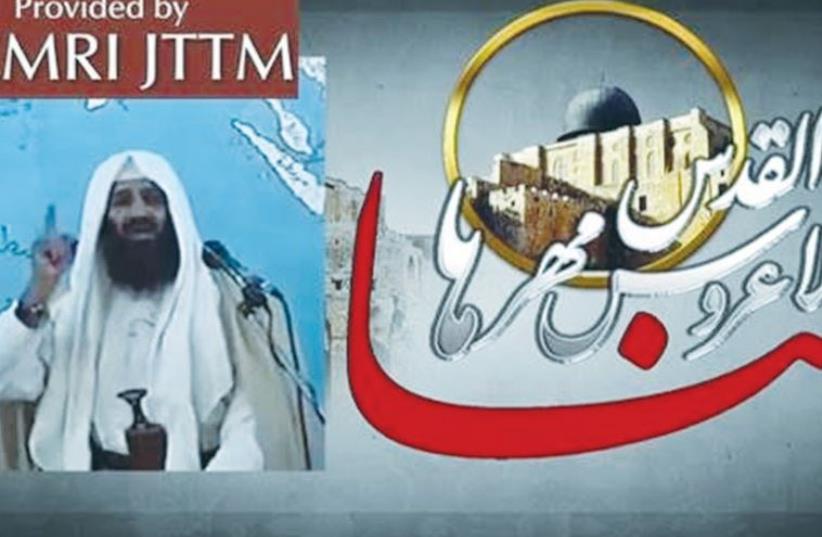 AN AL-QAIDA video released yesterday features a recorded message by Hamza bin Laden
(photo credit: MEMRI)
Advertisement
Hamza Bin Laden, the son of former al-Qaida leader Osama bin Laden, is calling for the targeting of Jewish and Western interests and the building of an army to “liberate Jerusalem.”According to a new al-Qaida video discovered by the Jihad and Terrorism Threat Monitor of MEMRI (the Middle East Media Research Institute) and shared with The Jerusalem Post, Hamza praised the stabbing attacks by Palestinians against Israelis and called on Muslims from around the world to join the fight to defend Jerusalem, urging them to “participate in the intifada” of their Palestinian brethren by “killing the Jews and attacking their interests everywhere.”In addition, Hamza called for Muslims to attack the interests of US and Western countries in the Muslim world because of their support for Israel.The supporters of the Jews “must pay the bill in their blood” and must feel what Palestinians in Gaza and elsewhere have been feeling, he said.According to the report, Hamza stressed the obligation of jihad upon every Muslim in order to defend al-Aksa Mosque on the Temple Mount and Muslim women, who he claimed are being killed by Jews in cold blood.He also suggested building a mega army based primarily in Syria to “liberate Palestine.”“The best arenas that are prepared for such a great task [of building that army] is the blessed arena of Al-Sham [Syria],” he said.“We must remember that the road to liberating Palestine today is much closer than the one that existed before the blessed Syrian revolution. Thus, the Muslim Ummah must focus its attention on the jihad in Syria.”He also called for the mujahideen in Syria to unite their ranks, saying: “All believers are brothers with no difference between an Arab and a non-Arab [Muslim] but [the level of] their piousness.”He urged Muslim scholars to physically join the jihad and for Muslim businessmen to fund it with charitable donations.All these efforts, Hamza said, will be directed at building the army to liberate Jerusalem.The MEMRI report noted that the video also includes archival footage of Osama bin Laden speaking about Palestine, and of Sheikh Ibrahim Al-Rubaish, a top Shari’a official in al-Qaida in the Arabian Peninsula (AQAP) who was killed last year.