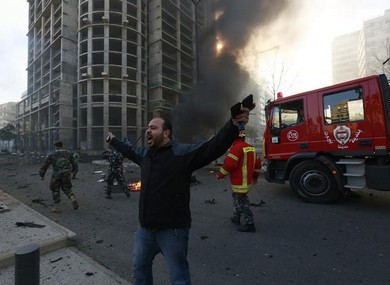 His killing occurred three weeks before the long-delayed opening of a trial of five Hezbollah suspects indicted for the Feb. 2005 bombing which killed former prime minister Rafik al-Hariri, Saad's father, and 21 other people.Hezbollah has denied involvement in the 2005 attack. Preliminary UN investigations implicated Syrian officials.A tweet posted on his Twitter account less than an hour before the blast accused the Shi'ite movement of trying to take control of the country.

#Hezbollah is pressing hard to be granted similar powers in security &amp; foreign policy matters that Syria exercised in Lebanon for 15 yrs.

The explosion sent shock waves among residents and emptied the streets in downtown where people, seeking a respite from recent turmoil, had ventured out to enjoy the Christmas and New Year holiday period.The conflict in neighboring Syria has polarized Lebanon and ratcheted up sectarian tensions. Hezbollah has sent fighters to Syria to fight alongside Assad, who comes from the Alawite sect, a heterodox offshoot of Shi'ite Islam.Some of the Sunni Syrian rebel groups are linked to al Qaeda, which is also seeking to topple Assad.Former minister Marwan Hamadeh, who survived a car bombing in 2004, told Al Arabiya television: "Hezbollah will not be able to rule Lebanon, no matter how much destruction it causes or blood it spills". 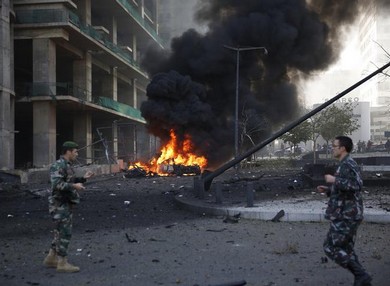 CAR WRECKEDSources at the explosion site said Chatah was on his way to attend a meeting at Hariri's headquarters when the explosion tore through his car. Hariri himself has stayed away from Lebanon for more than two years, fearing for his safety.A Reuters witness at the scene said his car was "totally destroyed, it is a wreck." Chatah's identity card, torn and charred, was found inside his car.Iran, which backs Hezbollah, came under attack in Beirut last month. On Nov. 19, two suicide bombings rocked the embassy compound in Lebanon, killing at least 25 people including an Iranian cultural attache and hurling bodies and burning wreckage across a debris-strewn street.A Lebanon-based al-Qaida-linked group, the Abdullah Azzam Brigades, claimed responsibility and threatened further attacks unless Iran withdraws forces from Syria, where they have backed Assad's 2-1/2-year-old war against rebels.The sound of Friday's blast was heard across the city at around 9:40 a.m. (0740 GMT) and a plume of black smoke was seen rising in the downtown business and hotel district. It shattered glass in nearby apartment blocks and damaged restaurants, coffee shops and offices in the chic district of downtown Beirut."I heard a huge explosion and saw a ball of fire and palls of black smoke. We run out of our offices to the streets," said Hassan Akkawi, who works in a finance company nearby."The explosion caught motorists driving in the morning rush hour here. There was terror and panic among residents. There was a big ball of fire and panic everywhere and then we learned that Chatah was the target," said Adel-Raouf Kneio.Minutes after the blast ambulances were seen taking victims from the area. A restaurant and a coffee shop were destroyed in the blast, and several cars were on fire, the witness said. There was glass everywhere and the acrid smell of explosives filled the air.Much of Beirut went into lockdown following the explosion, with police blocking off roads across the city.After a series of explosions in the capital and in the northern city of Tripoli, the Lebanese army had stepped up security measures ahead of Christmas and New Year, fearing further attacks.
Advertisement
Subscribe for our daily newsletter