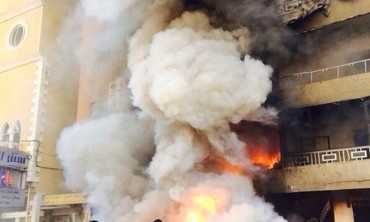 BEIRUT - Four people were killed in a blast in Beirut's southern suburbs on Tuesday, a security source told Reuters, attributing the blast to a suicide bomber wearing an explosive belt.

The source said another 20 people were wounded in the explosion, which occurred in a stronghold of the military and political movement Hezbollah.Images broadcast on the Shi'ite Muslim militant movement's Al Manar channel showed flames erupting from a building and a large plume of smoke billowing over a street near the charred remains of cars as a crowd gathered at the site of the blast.

Al Manar reported that the explosion occurred in the Haret Hreik area, which was the target of a car bomb attack earlier this month that killed at least five people.

Tensions from the war in neighboring Syria have increasingly spilled over into Lebanon.The politically powerful Hezbollah has sent fighters and advisers into Syria to help its ally President Bashar Assad, a member of the Shi'ite-derived Alawite minority, in his fight against mainly Sunni rebels. Hezbollah-run areas in Lebanon have been targeted by a string of rocket and bomb attacks in recent months claimed by hardline Sunni militants.
Advertisement
Hot Opinion