The three sisters and their nine children left in May to make the pilgrimage in Saudi Arabia, but did not return home to Britain on June 11 as planned. 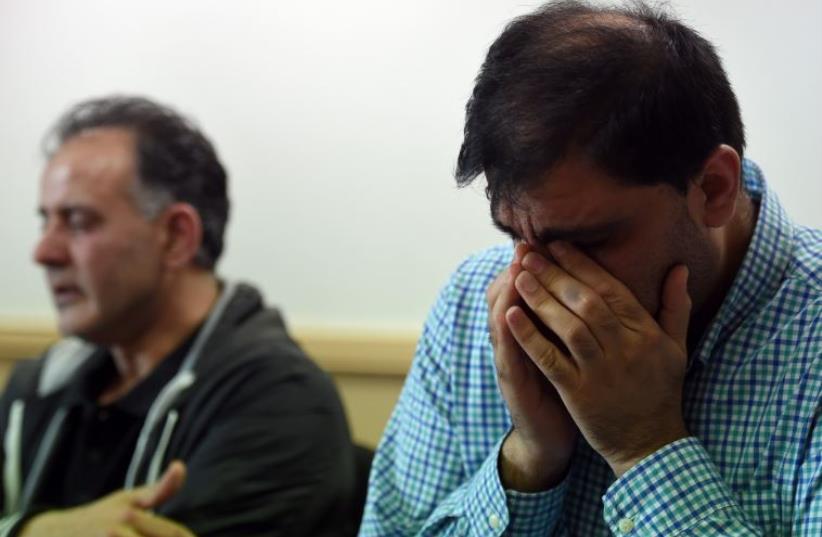 Akhtar Iqbal, husband of Sugra Dawood (L), and Mohammed Shoaib, husband of Khadija Dawood, react during a news conference to appeal for the return of their wives and children, in Bradford, northern England
(photo credit: PAUL ELLIS / AFP)
Advertisement
LONDON/ANKARA - One of three British sisters, thought to have headed with their nine children to join Islamic State militants, has made contact with her family in Britain and given an indication the group may be in Syria, British police said on Wednesday.British sisters Khadija, Sugra and Zohra Dawood and their children, aged between three and 15, were reported missing six days ago. On Tuesday the husbands of two of the women appealed for their return, fearing they might have gone to Syria."We have received information that contact has been made with the family in the UK ," West Yorkshire police said in a statement. "Contact has been made by one of the missing women and there is an indication that they may have already crossed the border into Syria but this is uncorroborated."The group flew to Saudi Arabia in May for an Islamic pilgrimage, and a Turkish security official said they traveled to Istanbul on June 9.Their families grew concerned when they failed to arrive back in Britain on June 11 as expected and British police contacted their Turkish counterparts for help the next day.Earlier on Wednesday a Turkish official said authorities were working to locate the women and their children, but had found no trace of them. "We have no idea if they are in Turkey or have crossed into Syria," the official said.British authorities estimate more than 700 Britons have traveled to Syria, with a significant proportion thought to have joined Islamic State, which has taken over vast areas of the country and neighboring Iraq.Islamic State is believed to have attracted thousands of foreign fighters, many of whom have passed through Turkey.Turkey has rebuffed criticism from some Western countries for failing to stem the flow, arguing that domestic intelligence agencies need to do more to stop their nationals being radicalized and traveling to Turkey in the first place.In February, Turkey accused Britain of taking too long to inform it about three London schoolgirls who had traveled to the country in order to enter Syria and become brides to Islamic State soldiers.