"The last time this migration happened in this way was back in 1917," said Magda Bou Dagher Kharrat, a professor in plant genetics in Lebanon. 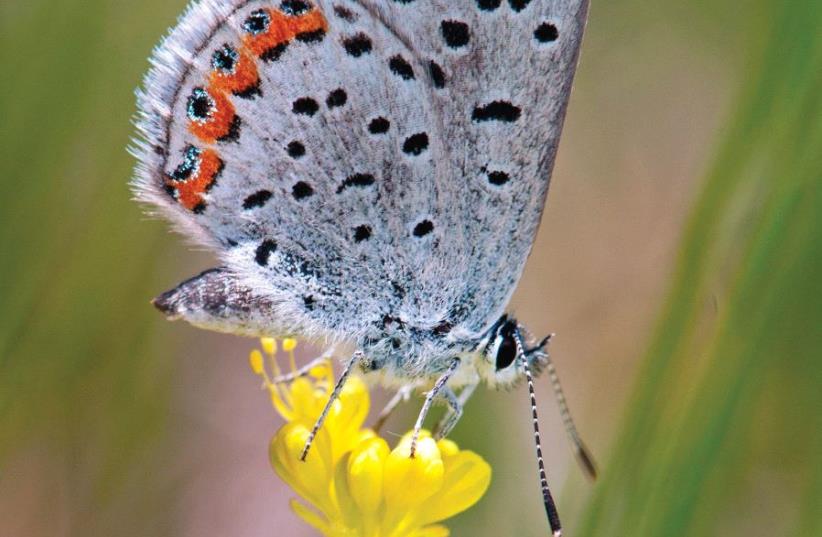 A butterfly on a flower
(photo credit: ITSIK MAROM)
Advertisement
ZAAROUR, Lebanon (Reuters) - A vast number of migrating butterflies have swarmed across Lebanon this year after heavy winter rain in the Middle East led to an exceptional spring for wild flowers.
"The last time this migration happened in this way was back in 1917," said Magda Bou Dagher Kharrat, a professor in plant genetics at Lebanon's St Joseph University.
The sheer number of Vanessa Cardui butterflies traveling from Africa to northern Europe caused admiring bewilderment, as millions crossed mountains, fields, villages and cities.
"They did not only pass through wild areas, forests and nature... so even the people who don't usually go out to nature witnessed this migration," said Bou Dagher Kharrat.
"What happened this year should be noted down for history."
The butterflies' distinctive black, white and russet wings have earned them the common name of "painted lady" and they could be seen in the northern villages of Mrouj and Zaarour flitting across large meadows of wild flowers.
"It was something really beautiful. People were stopping on the road to watch them... We have never seen anything like it before," said Rony Kharrat in Zaarour.
But for some villagers the influx brought back reminders of a locust infestation that fell upon Lebanon during its Great Famine of 1915-18, in which thousands died and many others emigrated.
Nassib al-Alam, an elderly farmer who has plowed his fields for the past 60 years, said at first some people had thought the locusts were back.
"Everywhere is still green, these (butterflies) are just passing by," he said, with snowcapped mountains behind him, another rare sight in mid-spring when most of the snow has usually melted. "They are beautiful."