"Anyone sponsoring terrorism will be punished no matter where they are," says Military spokesman; Egyptian air force cooperating with Libyan National Army. 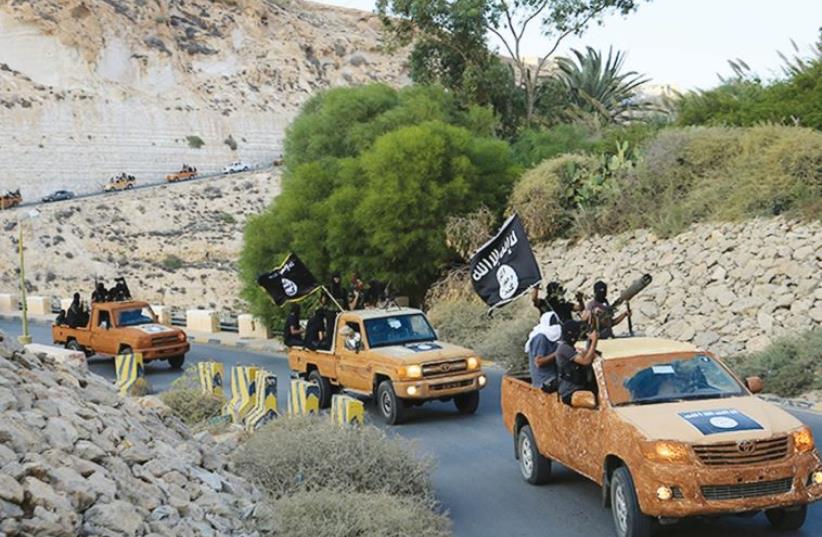 An armed motorcade belonging to members of Derna’s Islamic Youth Council drives along a road in the town of Derna in eastern Libya on October 3, 2014, a day after the group pledged allegiance to the Islamic State.
(photo credit: REUTERS)
Advertisement
Egypt made clear on Monday that it planned to press ahead with air strikes against Islamist militants in neighboring Libya who it says were responsible for killing Egyptian Christians in an ambush last week.Libyan military commanders said Egyptian jets hit the Libyan city of Derna on Monday, continuing attacks that began hours after masked men boarded vehicles driving dozens of people to a monastery in the southern Egyptian province of Minya on Friday and killed 29.A witness said on Monday one air attack hit the western entrance to Derna and two others hit Dahr al-Hamar in the city's south."The air strikes are joint ones between the Libyan National Army and Egyptian army," said Ahmad Messmari, a spokesman for the Libyan National Army, an eastern Libyan faction allied with Egypt.An Egyptian military spokesman, Colonel Tamer al-Refaei, said anyone who plotted what he called terrorist violence against Egypt was not beyond the reach of the military."Anyone sponsoring terrorism will be punished no matter where they are," he told the state-owned Ahram newspaper. "We have not announced the cessation of military operations against terrorist training camps." Libyan operational commander Brigadier Abdulsalam Al-Hasi told Reuters the strikes targeted Majlis Mujahideen Derna and Abu Salim brigade, two local Libyan groups allied with al Qaeda.Refaei said the military was not targeting a specific militant group because it did not differentiate between various factions.Egyptian Foreign Minister Sameh Shoukry said Egypt had targeted militant bases in Libya "to get rid of them and to limit their ability to threaten Egypt's national security." Speaking at a news conference in Cairo with Russian Foreign Minister Sergei Lavrov, Shoukry said Egypt looked forward to "Russia utilizing all of its available capabilities to work together to get rid of terrorism." ISLAMIC STATE Islamic State claimed responsibility for last week's attack in Egypt, the latest targeting the Christian minority there. Three church bombings since December, also claimed by Islamic State, have killed more than 70 people.Another Egyptian state-owned newspaper, Akhbar, said two men responsible for planning the Minya attack had also been involved in the church bombings. The two, now on the run, had been helped by accomplices from Libya who supported Islamic State.Akhbar quoted security sources as saying the two men had provided weapons and cars for the gunmen, some of whom belonged to Islamic State's Libyan affiliate.Egypt has carried out air strikes in Libya occasionally since its neighbor descended into factional fighting in the years following the 2011 civil war that ousted Muammar Gaddafi.Islamist militant groups, including Islamic State, have gained ground in the chaos, and Derna, a city of about 150,000 that straddles the coastal highway linking Libya to Egypt, has a long history with Islamist militancy.Islamic State first attempted to establish a presence in Libya in Derna, but it faced armed resistance from more locally affiliated militant groups, including the Majlis Mujahideen Derna coalition and the Abu Salim brigade. It was driven out of the city in 2015 and later set up its main Libyan base in Sirte.Egypt has been backing eastern commander Khalifa Haftar, whose Libyan National Army has been fighting Islamist militant groups and other fighters in Benghazi and Derna for more than two years.Messmari, the Libyan National Army spokesman, told reporters in Benghazi late on Sunday that Haftar's forces were coordinating with Egypt's military and the weekend raids targeted ammunition stores and operations camps.Egyptian President Abdel Fattah al-Sisi said on Friday the air raids targeted militants responsible for plotting the attack, and that Egypt would not hesitate to carry out additional strikes inside and outside the country.