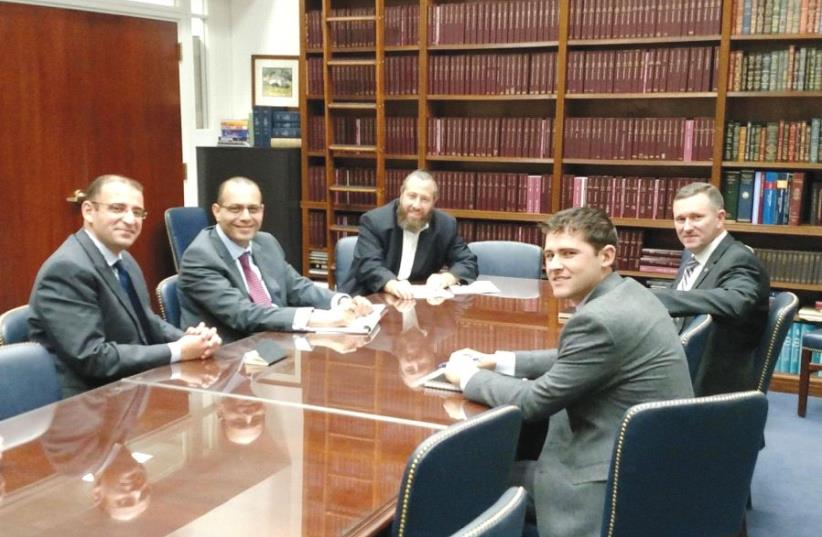 SEATED IN the office of Senator Orrin Hatch (R-UT) in Washington in 2016, from left: Egyptian Embassy officials Khaled El Menshawy and Muhammad Samir, Friedlander Group CEO Ezra Friedlander, and congressional staffers Doug Dynes and JC Cardinale
(photo credit: THE FRIEDLANDER GROUP)
Advertisement
NEW YORK – A bipartisan bill to award the Congressional Gold Medal to late Egyptian president Anwar Sadat will be introduced to Congress on Tuesday by Senator Orrin Hatch (R-UT), Senator Ben Cardin (D-MD), Representative Chris Stewart (R-UT) and Representative Grace Meng (D-NY).The medal is the highest civilian award bestowed by Congress.The bill, titled the Anwar Sadat Centennial Celebration Act, proposes to award the medal to Sadat “in recognition of his heroic achievements and courageous contributions to peace in the Middle East.” Next year will mark the 100th anniversary of Sadat’s birth.“President Sadat is recognized in the United States and throughout the world as a respected leader and champion of peace whose vision provided a road map for the peaceful resolution of conflict that endures nearly 40 years after its inception,” the bill reads.“President Sadat bravely reached out to Israel and dedicated himself to peace, furthering the national security of Egypt and the stability of the Middle East.”The bill’s introduction to Congress was coordinated by Ezra Friedlander, an Orthodox Jew and CEO of the public affairs consulting firm the Friedlander Group.Friedlander told the Post that he recalls watching the arrival of the late Sadat in Israel in the late 1970s, as a child.“It was a Saturday night. We didn’t have a television, but I remember as a kid going to a neighbor’s house to watch the news,” he said.“I was 10. It was as shocking then as it is now, just to think of it. That image always remained with me; it became a part of me.“Growing up and going through life you realize that it’s very easy to be friends with your friends, but Anwar Sadat, in my opinion, was one of the greatest statesmen of the 20th century because he, essentially, in a very dramatic way, changed his way of thinking and it took tremendous courage,” Friedlander continued.“So for me, having the opportunity to play a role in an important historical milestone was very important."Friedlander added that honoring Sadat was not just a way to remember history but could also serve as “a teaching moment... I firmly believe that presenting Anwar Sadat with a Congressional Gold Medal will once again allow for the world to recognize his heroism and bravery, but also encourage other world leaders to learn from that style, from his leadership,” he said.Friedlander said he hopes that if the bill passes, world leaders, particularly in the Middle East, would see the bill and the medal as carrying the message that “compromise and peace pays dividends long after you agree to make it.”As a Jew, Friedlander added, honoring a Muslim leader was important.“The Jewish people yearn for peace. We are willing and should be willing to travel to the end of the world for peace,” he said.“We need to actively commend and pay tribute to those leaders that historically were at odds with the Jewish people and the State of Israel and to embrace them.”Friedlander was also behind the Congressional Gold Medal awarded to late president Shimon Peres in 2014, and a posthumous one that same year to Swedish diplomat Raoul Wallenberg, celebrated for saving tens of thousands of Jews in Nazi-occupied Hungary.“Sadat took countless personal risks to achieve a society grounded in peace and diplomacy – an endeavor that ultimately cost him his life,” Hatch said in a press release.“Thus, awarding Sadat with the Congressional Gold Medal celebrates and gives homage to Sadat’s courageous, remarkable and enduring imprint on history.”A ranking member on the Senate Foreign Relations Committee, Cardin said in a press release that Sadat was the first Arab leader to recognize Israel and “displayed courage and vision when he negotiated the peace treaty, fundamentally changing the course of history in the Middle East for the better.”Awarding him the medal, Cardin added, not only honors this legacy, but also underscores the enduring commitment of the US to upholding the peace treaty between Egypt and Israel.Meng said in a press release that she was proud to co-sponsor the bill and urged the House and Senate to pass it.Friedlander said he was not expecting any opposition to the bill, and hoped Egyptian government representatives would make the trip to the US to collect the medal, which will also be presented to Sadat’s widow, Jehan Sadat.