Did Erdogan stage a coup against himself?

Senior Turkish official tells ‘Post’ the people who spread these false rumors also "believe 9/11 was an inside job." 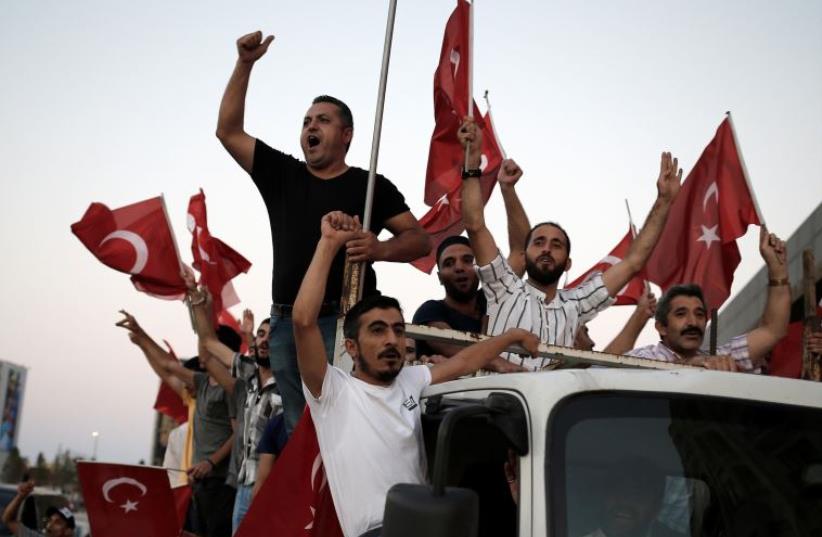 Supporters of Turkish President Tayyip Erdogan shout slogans on the back of a truck during a pro-government demonstration on Taksim square in Istanbul, Turkey, July 16, 2016
(photo credit: REUTERS)
Advertisement
Despite a claim by US-based Turkish cleric Fethullah Gulen that the coup was a ruse by President Recep Tayyip Erdogan to crack down on his domestic opponents, evidence so far points to a real coup attempt.Pictures of the destroyed Ankara police headquarters bombed by helicopters, other damaged buildings, and Erdogan breaking down in tears at the funeral of an old friend killed during the chaos appear to demonstrate that the abortive coup was just that – and not an elaborate conspiracy.A senior Turkish official from the presidency slammed rumors of an Erdogan conspired coup.“It is really disrespectful to see people who haven’t been here, who haven’t seen what the putschists did, just from the comfort of their homes, pass judgment and spread rumors about what happened in Turkey,” the official told The Jerusalem Post on Monday.“There are people who believe 9/11 was an inside job, and there are people that believe that Barack Obama is really a secret Muslim from Kenya,” he continued.Speaking from Ankara, the senior official pointed out that the parliament had been bombed by F-16s for the first time in history, and that he saw remains from bombs dropped next to the presidential palace. In addition, he said he saw video of tanks running over civilians.The Turkish official also mentioned the security video from the hotel where Erdogan had been staying, showing special forces that were part of the coup attempt raiding his room soon after he fled. The clash with security forces resulted in the death of two members of the president’s security detail, he said.Reacting to events in Turkey, Deputy Regional Cooperation Minister Ayoub Kara (Likud) told the Post, “For us, our official position is to respect all elected world governments that want relations with us, and of course Turkey.”“What occurred there is an internal matter of the Turkish people,” he said adding, “I was in touch during the days of crisis with Turkish sources, and received messages that they are going to strengthen the relations with Israel and respect the agreement with Israel.”Karel Valansi, a Turkish Middle East expert who writes for the Jewish Turkish weekly Salom and the T24 news outlet, told the Post, “I don’t think that the coup attempt was staged by the president, but it will surely give him more power and an excuse to consolidate power.”Everyone was surprised by what happened, she said, adding that a small faction in the army that conspired the coup seemed to leave many of the rank and file soldiers in the dark, with those stationed in front of Istanbul’s Ataturk Airport not having any idea about the plan. “They thought that it was a drill to combat Islamic State.”Every year in August there is a Supreme Military Council meeting where appointments and retirements are decided. “I think they moved their plans forward in desperation due to the upcoming meeting and were not prepared enough. It was very amateur from the very beginning,” said Valansi.Moreover, it was very difficult for those taking part in the coup attempt to control the narrative because of numerous TV stations and social media, which are essential to control during a successful coup.The public in general was against the military coup attempt, she asserted, and it appears that the plotters envisioned many members of the polarized public would come out in the streets and support them. In fact, she continued, the opposite occurred, with Erdogan’s supporters swarming the streets to defend the government.