The ISIS affiliate in Sinai that is eluding Egypt's security dragnet

If a bomb knocked Airbus A321 out of the sky, that would challenge Egypt's assertions that it had brought under control militants operating in the Sinai Peninsula. 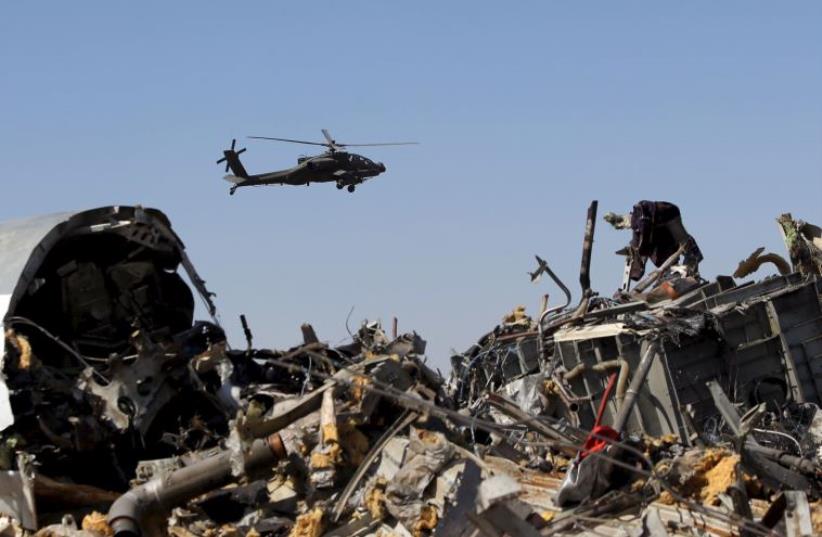 An Egyptian military helicopter flies over debris from a Russian airliner which crashed at the Hassana area in Arish city, north Egypt, November 1, 2015
(photo credit: REUTERS)
Advertisement
The Islamic State branch suspected of bringing down a Russian airliner in Egypt had eluded a security dragnet by operating in secretive cells inspired by a leader who used to import clothes for a living, Egyptian intelligence officials say.Western officials are increasingly pointing the finger of blame at Sinai Province, which has focused on killing Egyptian soldiers and police since the military toppled President Mohamed Morsi of the Muslim Brotherhood in 2013 after mass protests.If solid evidence emerges it attacked the aircraft, that would instantly propel the group to the top of the jihadi ladder, with one of the deadliest attacks since al-Qaida flew planes into the World Trade Center in New York in 2001.If a bomb knocked Airbus A321 out of the sky, that would challenge Egypt's assertions that it had brought under control militants who have carried out high-profile attacks on senior government officials and Western targets.Security experts and investigators have said the plane is unlikely to have been struck from the outside and Sinai militants are not believed to have any missiles capable of striking a jet at 30,000 feet.Sinai Province is partly the product of Egypt's efforts to eliminate militancy, which has threatened the most populous Arab country for decades, according to the intelligence sources.The three officials, who closely follow the Sinai-based insurgency, say many of its fighters fled to Syria after Morsi was removed and then army chief Abdel Fattah al-Sisi unleashed security forces on Islamists, both moderate and radical.Sinai Province's leader - a 42-year-old former clothes importer known by his nom de guerre Abu Osama al-Masri - studied at Al-Azhar, a 1,000-year old Egyptian center for Islamic learning that supports the government, said the officials.But like others who learned in a center known for its moderation, he was radicalized and took up arms in Sinai before heading to Syria with about 20 followers when security forces clamped down on Islamists after Morsi's departure, the sources said.

'THEY BECAME EXPERTS'There, he and the other fighters gained experience that would prove useful upon their eventual return to the Sinai, when they were approached by Islamic State and embraced its goal of creating a caliphate across the Muslim world.It seems they were mesmerized by Islamic State's mysterious Iraqi leader, Abu Bakr al-Baghdadi, said the officials.Islamic State sent arms and cash by boat from Iraq to neighboring Libya, where militants have thrived in the chaos that followed the fall of Muammar Gaddafi in 2011, said another intelligence official.A porous border then enabled Baghdadi's supporters to travel to Sinai, on the other side of Egypt, to deliver the goods to Islamist militant comrades, the officials added."Other militants taught them how to evade capture and they learned how to shoot accurately and assemble bombs," said one of the intelligence officials, speaking on condition of anonymity."They became experts."Will McCants, director of the Center for Middle East Policy at the Washington-based Brookings Institution, said that not a lot is known about the working relationship between the Islamic State's Sinai affiliate and the movement's central leadership.But the Egyptian group - like other affiliates - appears to enjoy considerable autonomy.The state security crackdown launched against the Muslim Brotherhood and other Islamists has gained the Islamic State's Sinai branch significant local support, allowing its fighters to hide and operate among ordinary people, he said.SECRETIVEDuring Morsi's time, security officials allege, militants from al-Qaida, including some who had traveled from as far away as Afghanistan, had a free hand in Sinai.They included about 4,000 fighters who would form the core of Sinai Province, which was called Ansar Beyt al-Maqdis before declaring its support for Islamic State last year, said the officials.The crackdown on Islamists by Sisi - now president - led to many militants being killed, jailed or fleeing for countries like Syria and Libya.Sinai Province now consists of only hundreds of militants scattered into groups of 5-7 men, which have few links to reduce the chances of capture, said the officials."They are very secretive," one of the intelligence officials said. "Each cell doesn't know about other cells."Another said: "It's a small number of militants but it takes just one person to carry out a suicide bombing."Last year, security officials said Masri and a few other leaders had been killed.He later appeared in a video purported to prove he is alive and reaffirmed his loyalty to Baghdadi. Masri could be seen kneeling beside weapons he said were seized from 30 Egyptian soldiers killed in an attack.A military armored personnel carrier burned in the background.A tribal leader in the Sinai told Reuters he had recently noticed pro-Islamic State militants driving around in new Toyota Land Cruisers. Some had Apple computers."It seems they are getting more and more ambitious," he said.