On the same day, Egypt also banned all forms of support toward the LGBT community on media outlets. 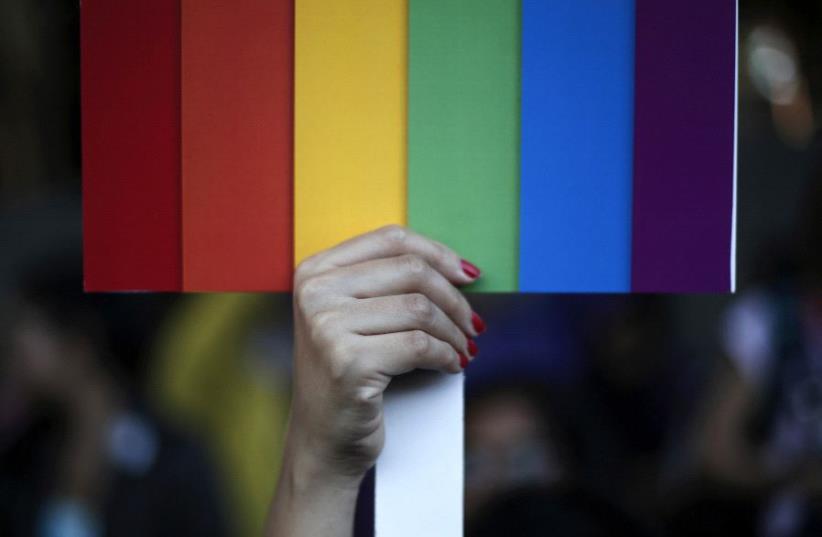 A rainbow coloured placard in the colors of the LGBT flag [Illustrative]
(photo credit: REUTERS)
Advertisement
CAIRO - Six Egyptian men arrested for “promoting sexual deviancy” and “debauchery” on social media will be subjected to anal examinations ahead of their Oct. 1 trial, Amnesty International said on Saturday.Their arrest is part of a wider crackdown against homosexuality that started last week when a group of people were seen raising a rainbow flag at a concert, a rare public show of support for lesbian, gay, bisexual and transgender rights in the conservative Muslim country.At least 11 people have since been arrested, Amnesty said, and one man has been sentenced to six years in jail after local media launched a highly critical campaign against those who raised the rainbow flag at a Mashrou’ Leila concert, a popular Lebanese alternative rock band whose lead singer is openly gay.Amnesty said the Forensic Medical Authority was due to subject the six men to anal examinations to determine whether they have had homosexual sex.Judicial sources said any defendant accused of “debauchery” or “sexual deviancy,” a euphemism for homosexuality in Egypt, is subjected to a medical examination based on an order from the Public Prosecutor.“Allegations of torturing or insulting those medically examined are lies not worth responding to. The examinations are carried out by a forensic doctor who swore to respect his profession and its ethics,” one judicial source said.Amnesty said such examinations violate the prohibition of torture and other ill-treatment under international law.“The fact that Egypt’s Public Prosecutor is prioritizing hunting down people based on their perceived sexual orientation is utterly deplorable. These men should be released immediately and unconditionally – not put on trial,” said Najia Bounaim, North Africa Campaigns Director at Amnesty International.“Forced anal examinations are abhorrent and amount to torture. The Egyptian authorities have an appalling track record of using invasive physical tests which amount to torture against detainees in their custody. All plans to carry out such tests on these men must be stopped immediately.”On the same day, Egypt also banned all forms of support toward the LGBT community on media outlets, including showing gay characters on Television, according to Egyptian media.Homosexuality is considered a ‘shameful disease’ that should not be promoted through Egyptian media, according to a statement released from the Egyptian Supreme Council for Media Regulation. Egypt became the second country to ban homosexuality on television in recent weeks after Indonesia last Thursday.Egypt’s Muslim religious establishment is voicing its support for the government’s moves against homosexuals.“Al Azhar will stand against calls for sexual perversion the same way it has stood against extremist groups,” a preacher at the 1,000-year-old seat of Sunni Muslim learning said in his Friday prayers sermon.Although homosexuality is not specifically outlawed in Egypt, it is a conservative society and discrimination is rife. Gay men are frequently arrested and typically charged with debauchery, immorality or blasphemy.The largest crackdown on homosexuals took place in 2001, when police raided a floating disco called the Queen Boat. Fifty-two men were tried in the case.