The goal of the operation is to “root out terrorist elements” from Sinai towns of Rafah, El-Arish, and Sheikh Zuweid. 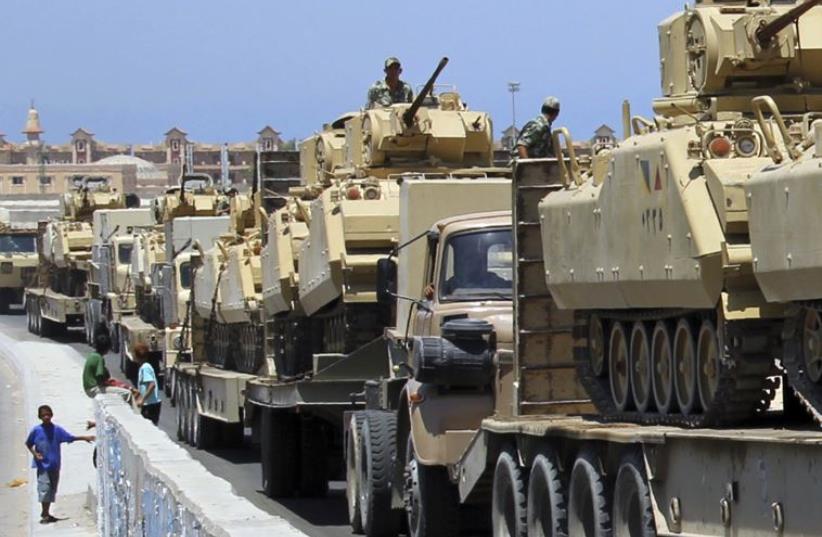 A boy walks near army trucks carrying tanks and vehicles, expecting opposition against militants, arriving at Rafah city.
(photo credit: REUTERS)
Advertisement
The Egyptian army says that it killed 27 terrorists on Tuesday, the second day of a major operation that began on Monday, bringing the total death toll to 56.The army said an additional 156 suspected jihadists were arrested in the operation that included anti-terror police units and air support, Ahram Online reported.The goal of the operation is to “root out terrorist elements” from Sinai towns of Rafah, El-Arish, and Sheikh Zuweid. Sources said it is the largest operation in recent months, said the report.The army also cleared out several terrorist hideouts and destroyed two explosive caches and other vehicles.Sheikh Abdullah Gahama, deputy head of the Coalition of Arab Tribes, told Ahram Online in a separate report that "Tribes largely support this operation,” but have not direct role in the fighting."The security situation has notably improved in North Sinai with the army largely having things under control over the past three months," he said.Military and other sources said that the latest campaign was triggered by fresh intelligence.Suspected Islamist insurgents carried out two attacks in Egypt on Monday against security forces, wounding at least 10 and killing two.An attack at a police checkpoint in the Nile Delta governorate of Beheira wounded five policemen, according to the Interior Ministry, Egyptian media reported.Meanwhile, the Rafah border crossing to Gaza remained open on Wednesday in order to allow pilgrims to travel on the hajj to Mecca, a source at the crossing said, Egypt's state news agency MENA reported.