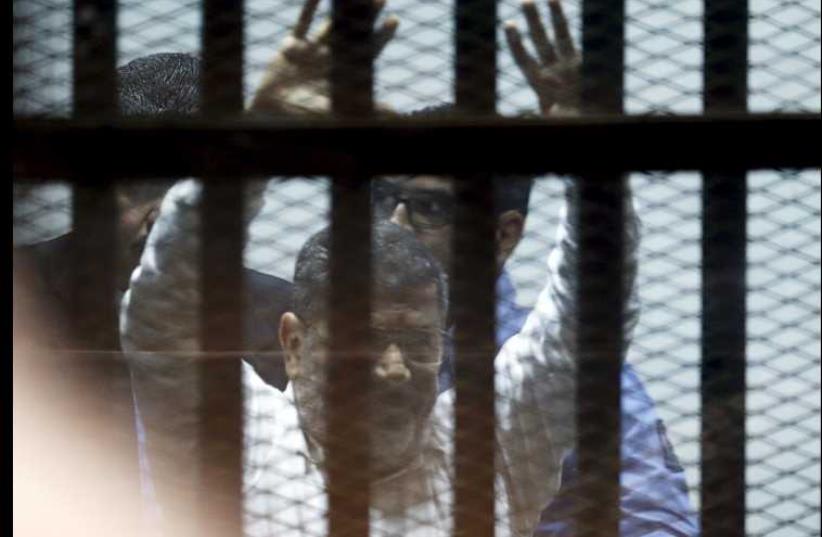 Ousted Egyptian President Mohamed Morsi gestures after his trial behind bars at a court in the outskirts of Cairo
(photo credit: REUTERS)
Advertisement
CAIRO - An Egyptian court sentenced deposed President Mohamed Morsi to death on Tuesday on charges of killing, kidnapping and other offenses during a 2011 mass jail break.The general guide of the Muslim Brotherhood, Mohamed Badie, and four other Brotherhood leaders were also handed the death penalty. More than 80 others were sentenced to death in absentia.Earlier on Tuesday, the court sentenced Morsi to life in prison in a separate case related to conspiring with foreign groups.The Islamist became Egypt's first democratically elected president after the downfall of longtime autocrat Hosni Mubarak in 2011 but was himself overthrown by the army in 2013 after mass protests against his rule.The court last month convicted Morsi and his fellow defendants of killing and kidnapping policemen, attacking police facilities and breaking out of jail during the 2011 uprising against Mubarak.The death sentence request had drawn criticism from the United States, other Western governments and human rights groups.After Tuesday's sentencing, a senior Muslim Brotherhood member said the trial had "fallen below all international standards.""This verdict is a nail in the coffin of democracy in Egypt," Yahya Hamid, a former minister in Morsi's cabinet and head of international relations for the Brotherhood, told a news conference in Istanbul.Morsi, Badie and 15 others were also given life sentences -- which under Egyptian law, means serving 25 years -- for conspiring with the Palestinian group Hamas, which rules Gaza. They included senior Brotherhood figures Essam el-Erian and Saad el-Katatni.The court sentenced Muslim Brotherhood leaders Khairat el-Shater, Mohamed el-Beltagy and Ahmed Abdelaty to death in the same case. Death sentences were also handed to 13 other defendants in absentia. The verdicts can be appealed.Judge Shaaban el-Shami, said the Grand Mufti, Egypt's top religious authority, had said in his opinion that the death sentence was permissible for the defendants who had been referred to him.Morsi, dressed in a blue prison suit, was calm and smiled slightly as the judge read out the first sentence in the court in the Police Academy.The defendants chanted "Down, down with military rule," as they were led into the court.Morsi has said the court is not legitimate, describing legal proceedings against him as part of a coup led by former army chief Abdel Fattah al-Sisi in 2013.Since Morsi's overthrow, Egyptian authorities have waged a crackdown on Islamists in which hundreds have been killed and thousands arrested.Sisi, now president, says the Brotherhood poses a grave threat to national security. The group maintains it is committed to peaceful activism.Despite US lawmakers' concerns that Egypt is lagging on democratic reforms, Cairo remains one of Washington's closest security allies in the region.Relations cooled after Morsi was overthrown but ties with Sisi have steadily improved.In late March, US President Barack Obama lifted a hold on a supply of arms to Cairo, authorizing deliveries of US weapons valued at over $1.3 billion.