Online dating platforms, such as Grindr, are jeopardizing the safety of the conservative Muslim country's homosexual population, according to local lifestyle media. 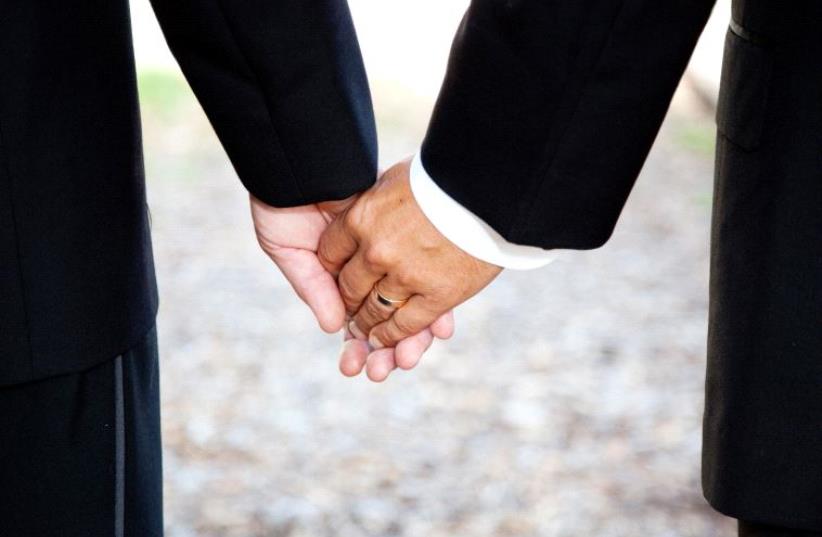 A same-sex couple [Illustrative]
(photo credit: INGIMAGE)
Advertisement
Egyptian government authorities have reportedly been using gay dating apps to locate and detain members of the LGBT community, according to online lifestyle and entertainment magazine CairoScene. The outlet cited a source close to the LGBT (lesbian, gay, bisexual and transgender) community as claiming that the online dating platforms, such as Grindr, are jeopardizing the safety of the conservative Muslim country's homosexual population."There have been a number of arrests in the last few months linked to these applications," CairoScene quoted the unnamed source as saying.  The source stated that the government authorities use the technology to pinpoint the location of users by triangulation. "It is possible to tell a user's position within a few hundred meters," the source added, saying the personal photographs uploaded by users to their dating profiles makes them easily identifiable to police. "It baffles me how easily people are willing to share such personal information in a country like Egypt - it is beyond stupid," asserted the source. "I would advise anyone to be careful when dating online."While homosexuality is not specifically outlawed in Egypt, members of the country's LGBT population are known to face hostilities and punitive measures based on other charges. A recent crackdown on Egypt's LGBT community has led many of its members to conceal their identity out of fear of arrest or physical harm. In April, an Egyptian court sentenced 11 men accused of committing homosexual acts to terms of up to 12 years in jail on charges of "inciting debauchery." In late 2014, Egyptian authorities detained 26 men in a raid on a Cairo bath house after police received a report claiming they were holding gay orgies. A court later ruled to release the men.