At least 44 people were killed in the Palm Sunday attacks in the cities of Tanta and Alexandria. 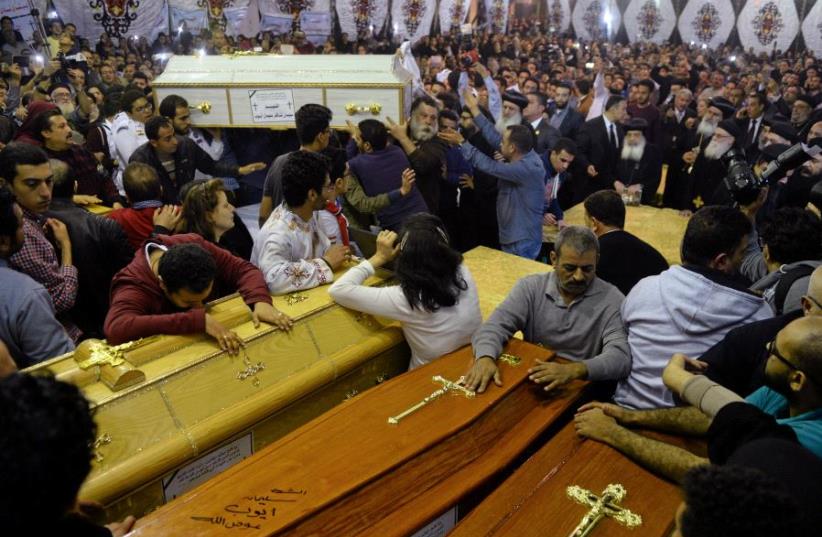 Relatives of victims react to coffins arriving to the Coptic church that was bombed on Sunday in Tanta, Egypt, April 9, 2017
(photo credit: REUTERS)
Advertisement
Egyptians in the Nile Delta city of Tanta held funerals for a number of victims of Sunday's bombings targeting Egyptian churches that left at least 44 people dead in Tanta and Alexandria.Islamic State claimed responsibility for the attacks, which also injured more than 100 people and occurred a week before Coptic Easter, with Pope Francis scheduled to visit Egypt later this month.
Footage of explosion at church in Alexandria , Egypt on April 9, 2017 (REUTERS)
The assault is the latest on a religious minority increasingly targeted by Islamist militants, and a challenge to President Abdel Fattah al-Sisi, who has pledged to protect them as part of his campaign against extremism.The first bombing, in Tanta, a Nile Delta city about 100 km (60 miles) north of Cairo, tore through the inside of St. George Church during its Palm Sunday service, killing at least 27 people and injuring at least 78, the Ministry of Health said.The second, a few hours later in Alexandria, hit Saint Mark's Cathedral, the historic seat of the Coptic Pope, killing 17 people, including three police officers, and injuring 48, the ministry added.Coptic Pope Tawadros had been leading the mass at Saint Mark's Cathedral at the time of the explosion but was not injured, the Interior Ministry said.Islamic State said two of its fighters wearing suicide vests carried out the attacks, and it warned of more to come.Islamic State's branch in Egypt has stepped up attacks and threats against Christians, who comprise about 10 percent of Egypt's 90 million people and are the biggest Christian minority in the Middle East.