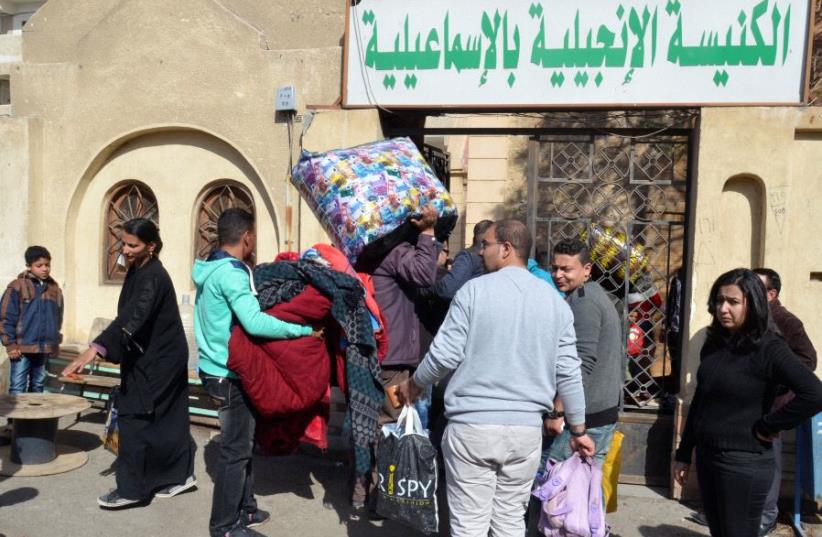 Christian families who left from Al-Arish in the North Sinai Governorate after the escalation of a campaign targeting Christians by Islamic State militants
(photo credit: REUTERS)
Advertisement
ISMAILIA, Egypt - Christian families and students fled Egypt's North Sinai province in droves on Friday after Islamic State killed the seventh member of their community in just three weeks.A Reuters reporter saw 25 families gathered with their belongings in the Suez Canal city of Ismailia's Evangelical Church and church officials said 100 families, out of around 160 in North Sinai, were fleeing. More than 200 students studying in Arish, the province's capital, have also left.Seven Christians have been killed in Arish between Jan. 30 and Thursday. Islamic State, which is waging an insurgency there, claimed responsibility for the killings, five of which were shootings. One man was beheaded and another set on fire."I am not going to wait for death," Rami Mina, who left Arish on Friday morning, said by telephone. "I shut down my restaurant and got out of there. These people are ruthless."Sectarian attacks occur often in Egypt but are usually confined to home burning, crop razing, attacks on churches, and forced displacement.Arish residents said militants circulated death lists online and on the streets, warning Christians to leave or die."My father is the second name on their list; anyone Christian they put on the list," Munir Adel, a vegetable seller who fled on Friday, said as he huddled with four family members at the Evangelical Church, waiting for church officials to find them a place to stay.Adel's parents did not leave Arish because of their old age, he said. "They could be killed at any moment."Islamic State released a video on Sunday threatening Egypt's Christians and vowing to escalate a campaign against them after it bombed a chapel adjoining Cairo's St Mark's Cathedral, the seat of the Coptic papacy, in December, killing 28 people.President Abdel-Fattah el-Sisi told military and police chiefs "to completely eradicate terrorism in northern Sinai and defeat any attempts to target civilians or to undermine the unity of the national fabric," in reference to the killings, his office said on Thursday.Egypt is battling an insurgency that gained pace in 2013 after its military, led by Sisi, overthrew President Mohamed Mursi of the Muslim Brotherhood. Hundreds of soldiers and police have been killed.Major General Mostafa al-Razaz, North Sinai's deputy police chief, said security forces were capable of handling the "crisis" and that they added more patrols and checkpoints.But Sinai's Christians say security forces on the ground are unable to protect them and are overwhelmed by the militants."The government does nothing. There is no security in Sinai, they can't even protect themselves," said Adel."It was an officer who told us to leave."