'Enlightened world must unite against forces of darkness,' Netanyahu says

Acts of terrorism by Islamists in France, Tunisia, and Kuwait on Friday left dozens dead and scores wounded. 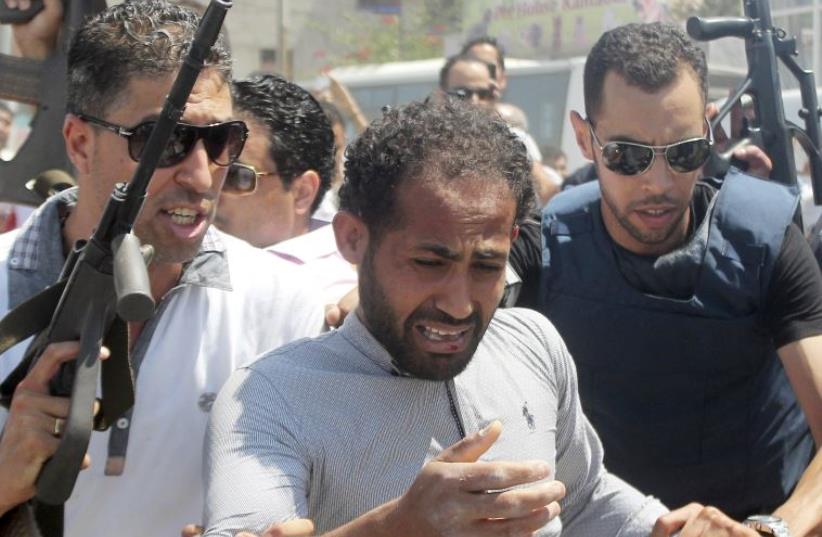 Police officers surround a man (C) suspected to be involved in an attack on a beachside hotel in Sousse, Tunisia
(photo credit: REUTERS)
Advertisement
Prime Minister Benjamin Netanyahu called on "the enlightened world" to unite "against the forces of darkness" who perpetrated the acts of terrorism in France, Tunisia, and Kuwait on Friday that left dozens dead and scores wounded."These cruel acts of murder...once again highlight the fact that the enlightened world is in a struggle against the forces of darkness," Netanyahu said. "The struggle against the murderous terrorism of extremist Islam requires us to unite, and this begins with unequivocally denouncing the murderers and their supporters." A suicide bomber killed 25 people when he blew himself up inside a packed Shi'ite Muslim mosque in Kuwait city during Friday prayers, the interior ministry said, the first attack of its kind in the major oil-exporting country.The Islamic State militant group claimed responsibility for the attack, which also wounded 202 people according to the interior ministry, in the district of Sawaber in the eastern part of the Kuwaiti capital. At least 28 people, including foreign tourists, were killed when at least one gunman opened fire on a Tunisian beachside hotel in the popular resort of Sousse on Friday, an interior ministry spokesman said.Police were still clearing the area around the Imperial Marhaba hotel and the body of one gunman lay at the scene with a Kalashnikov assault rifle after he was shot in an exchange of gunfire, a security source at the scene said.It was the second major attack in the North African country this year, and took place during the holy Muslim month of Ramadan.  A decapitated body daubed with Arabic writing was found at a US-owned factory in southeast France on Friday after an assailant rammed a delivery van into gas containers at the site, triggering an explosion.A source close to the investigation said the victim was the boss of the suspect, a delivery man. The two had gone to the company to make a delivery but the assailant killed and beheaded his 50-year-old manager before entering the secured site in the vehicle.The attacker was injured in the blast and arrested on the site. His wife was later taken into custody and authorities were questioning at least one other suspected accomplice.Speaking from a European Union summit in Brussels, French President Francois Hollande described it as a terrorist attack and said all measures would be taken to stop any future strikes on a country still reeling from Islamist assaults in January.Reuters contributed to this report.