By REUTERS
car bomb in turkey 370
(photo credit: reuters)
Advertisement
REYHANLI, Turkey - Twin car bombs killed around 40 people and wounded many more in a Turkish town near the Syrian border on Saturday and Turkey said it suspected Syrian involvement.The bombing increased fears that Syria's civil war was dragging in neighboring states despite renewed diplomatic moves towards ending fighting in which more than 70,000 people have been killed.The bombs ripped into crowded streets in the early afternoon in Reyhanli, scattering cars and concrete blocks in the town in Turkey's southern Hatay province, home to thousands of Syrian refugees.President Bashar Assad's administration was the "usual suspect" in the attacks, Turkish Deputy Prime Minister Bulent Arinc said."We know that the people taking refuge in Hatay have become targets for the Syrian regime," Arinc said in comments broadcast on Turkish television. "We think of them as the usual suspects when it comes to planning such a horrific attack."Turkish Deputy Prime Minister Besir Atalay said initial findings of an investigation into car bombs that killed at least 43 people on Saturday showed the attackers were linked to Syria's intelligence agency, broadcaster NTV reported.There was no immediate claim of responsibility. Nor was there any comment from Damascus.NATO member Turkey supports the uprising against Assad and violence has crossed the border before, but not on the same scale.Turkey is far from alone in fearing the impact of Syria's war, which is already helping inflame the Middle East's tangle of sectarian, religious and nationalist struggles. 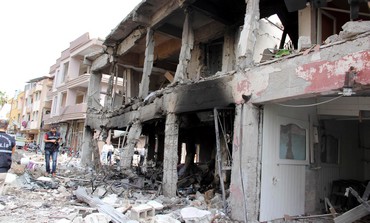 A plainclothes officer inspects the blast site.Turkish Foreign Minister Ahmet Davutoglu said it was no coincidence the bombings came as diplomatic moves to end the Syrian conflict intensify."There may be those who want to sabotage Turkey's peace, but we will not allow that," Davutoglu told reporters during a trip to Berlin. "No-one should attempt to test Turkey's power."

Click for full JPost coverageThe United States strongly condemned the twin bombings and vowed solidarity with Turkey in identifying those responsible.US Secretary of State John Kerry condemned the car bombings saying in a written statement that the US stood with its ally Turkey. "This awful news strikes an especially personal note for all of us given how closely we work in partnership with Turkey, and how many times Turkey's been a vital interlocutor at the center of my work as Secretary of State these last three months," Kerry said. "The United States strongly condemns today's vicious attack, and stands with the people and government of Turkey to identify the perpetrators and bring them to justice," US Ambassador to Turkey Francis Ricciardone said in a statement.Prospects appeared to improve this week for diplomacy over the civil war, now in its third year, after Moscow and Washington announced a joint effort to bring government and rebels to an international conference.But a Russian official said on Saturday that there was already disagreement over who would take part and he doubted whether a meeting could happen this month.As well as disputes over who would represent the rebels and government at any talks, there have also been questions over possible participation by Assad's Shi'ite ally Iran. The rebels are backed by the largely Sunni Gulf states.Diplomats in New York said the Syria meeting would likely slip into June and it was unclear who would participate.DEATH TOLL MAY RISEIn Reyhanli, smoke poured from charred ruins after the blasts outside administrative buildings."My children were so scared because it reminded them of the bombings when we were in Aleppo. God help us," said one refugee, a mother of three who gave her name as Kolsum. 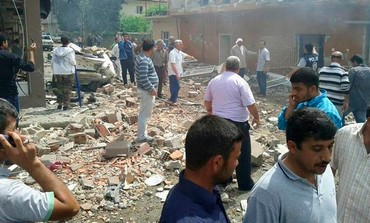 People gather at the blast site.Arinc said around 40 people had been killed, while Prime Minister Tayyip Erdogan warned the toll could rise with many more seriously injured.Erdogan said the bombings might have been related to Turkey's own peace process with Kurdish militants of the Kurdistan Workers Party (PKK), who began a withdrawal this week to end a three decade conflict.But he said the blasts could also have been aimed at provoking sensitivities in the region that is home to so many Syrian refugees.Turkey is sheltering more than 300,000 Syrians, most of them in camps along the 900-km (560-mile) frontier, and is struggling to keep up with the influx.Erdogan said this week Turkey would support a US-enforced no-fly zone in Syria and warned that Damascus crossed President Barack Obama's "red line" on chemical weapons use long ago.A no-fly zone to prohibit Syrian military aircraft from hitting rebel targets has been mentioned by American lawmakers as one option the United States could use to pressure Assad.Erdogan is due to meet Obama in Washington on May 16.Violence also crossed the border in February, when a minibus blew up at a border crossing near Reyhanli, killing 14 people.The Syrian opposition said one of its delegations appeared to have been the target of that attack, but there has been no confirmation of this from the Turkish authorities.In October, five Turkish civilians were killed in Akcakale when a mortar bomb fired from Syria landed on their house, prompting Turkey to fire back across the frontier.
Advertisement
Subscribe for our daily newsletter