A photograph of the tiny body of three-year old Aylan Kurdi washed up in the Aegean resort of Bodrum swept social media on Wednesday. 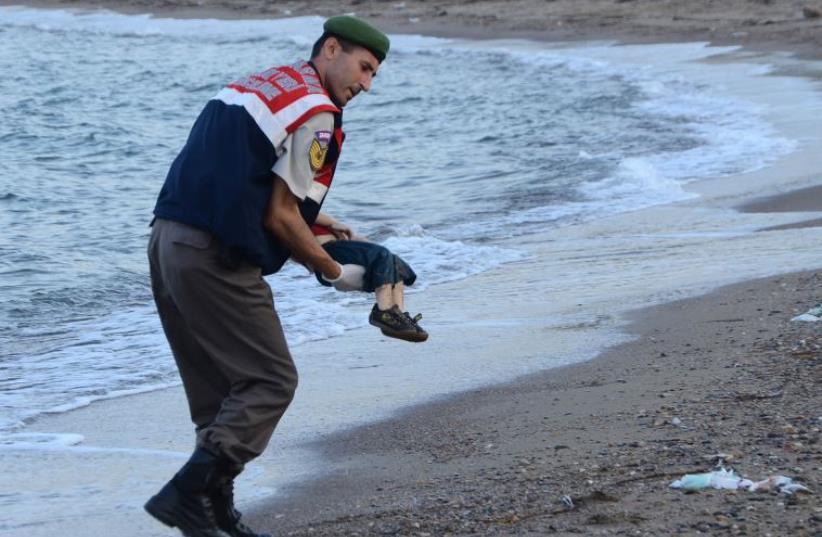 Bodrum Child
(photo credit: STR / DOGAN NEWS AGENCY / AFP)
Advertisement
The family of a Syrian toddler whose body washed up on a Turkish beach had been trying to emigrate to Canada after fleeing the war-torn town of Kobani, one of their relatives told a Canadian newspaper on Thursday.A photograph of the tiny body of three-year old Aylan Kurdi washed up in the Aegean resort of Bodrum swept social media on Wednesday, spawning sympathy and outrage at the perceived inaction of developed nations in helping refugees.His 5-year-old brother Galip and mother Rehan, 35, also died after their boat capsized while trying to reach the Greek island of Kos. His father, Abdullah, was found semi-conscious and taken to hospital near Bodrum, according to Turkey's Sabah newspaper."I heard the news at five o'clock this morning," Teema Kurdi, Abdullah's sister and a resident of Vancouver, was quoted as saying by Canada's National Post newspaper. Teema had been contacted by the wife of one of Abdullah's brothers."She had got a call from Abdullah, and all he said was, my wife and two boys are dead," Teema said.Abdullah, his wife and two children had made a privately-sponsored refugee application to the Canadian authorities that was rejected in June because of complications with applications from Turkey, the newspaper quoted Teema as saying."I was trying to sponsor them, and I have my friends and my neighbors who helped me with the bank deposits, but we couldn't get them out, and that is why they went in the boat," she said."I was even paying rent for them in Turkey, but it is horrible the way they treat Syrians there."Turkey has won international praise for taking in 2 million refugees since the Syrian civil war began in March 2011, spending $6 billion caring for them and receiving just $400 million in outside aid.But it has warned it is reaching capacity, and thousands are now making the perilous journey by boat from Turkey to Greece in a bid to enter Europe.Kobani, a town in northern Syria near the Turkish border, was the scene of heavy fighting between Islamic State insurgents and Kurdish regional forces several months ago.Tens of thousands of Syrians fleeing the war in their homeland have descended on Turkey's Aegean coast this summer to board boats to Greece.The Turkish army said its search and rescue teams had saved hundreds of migrants in the seas between Turkey and Greek islands over the last few days.Abdullah's family were among at least 12 presumed Syrian refugees who died trying to reach Kos after two boats, carrying a total of 23 people, set off separately from the Akyarlar area of the Bodrum peninsula, a naval official said.The UN refugee agency estimates that almost 160,000 refugees and migrants have arrived in Greece by sea since the start of last year. In July more than 50,000 people, mostly Syrians, arrived in Greece compared with 43,500 in the whole of 2014.
The agency has repeated calls for Greece and the European Union to take steps to address the situation.