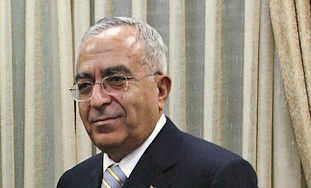 Palestinian Authority Prime Minister Salam Fayyad's government has been working to weaken Fatah by drying up its financial resources and isolating it in the political and security fields, Fatah officials said on Tuesday.The latest allegation came as members of the Fatah Revolutionary Council continued their deliberations for the sixth consecutive day in Ramallah to discuss the faction's financial status and the crisis with Hamas.Some council members accused Fayyad, from the Third Way Party, of working to "marginalize" Fatah's role, and urged PA President Mahmoud Abbas to form a new government.They said that the financial crisis in Fatah, which escalated after Fayyad took over as prime minister on May 19, has forced the faction to close down many of its offices in the West Bank and the Gaza Strip, as well as in the greater Arab world.Hatem Abdel Kader, a member of the Fatah Revolutionary Council and a former minister for Jerusalem affairs, said that Abbas has in the past rejected calls to reshuffle the Fayyad cabinet so that it would include more Fatah ministers.

"The president has been saying that he won't change the government because this was his government," Abdel Kader told the Asharq Al-Awsat daily. "Abbas said that he would continue to defend the government."Abdel Kader said that many Fatah representatives were hoping that the faction would be better represented in a new cabinet. Fayyad's cabinet consists largely of non-Fatah members.Abdel Kader added that Fayyad's government has endorsed a policy aimed at undermining the power of Fatah in the West Bank. "He's trying to isolate Fatah in the political and security fields," he charged. "He's trying to pick the fruits of the achievements made by Fatah over the past decade."In the past two years, Fatah representatives have been left with the impression that the Fayyad government is working to harm the status of their faction, he said. "A majority of Fatah members want change, but it doesn't seem that this is going to happen in the near future. The Europeans, who are the main source of funding for the Palestinian Authority, want Fayyad in power."The Fatah council is also discussing ways of regaining control over the Gaza Strip, which has been under the exclusive control of Hamas since the summer of 2007, said Fatah spokesman Jamal Nazzal. He said that the discussions were also focusing on the severe financial crisis in Fatah.Nazzal said that the council has formed a special committee whose main task would be to come up with a strategy to ensure the return of Fatah to the Gaza Strip, "preferably through negotiations with Hamas."Holding Hamas responsible for the continued crisis, Nazzal said that the Islamist movement wants to "dance in the dark alone instead of joining forces with Fatah."He voiced pessimism on the prospects for reconciliation between Hamas and Fatah, "due to Hamas's mentality of factionalism and rebellion."Nazzal and other Fatah operatives expressed outrage that the Fayyad government was doing well financially while Fatah was being weakened and its coffers were empty.
Advertisement
Subscribe for our daily newsletter