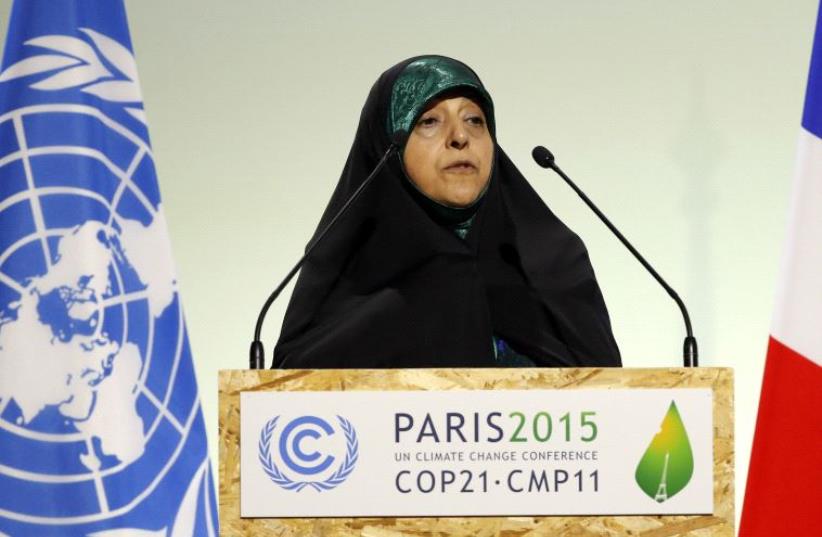 Iranian Vice President Masoumeh Ebtekar
(photo credit: REUTERS)
Advertisement
Iran’s press and social media users blasted a handshake between Germany’s Minister for the Environment Barbara Hendricks and Iranian Vice President Masoumeh Ebtekar on Thursday.The Iranian news outlet IRIB reported that Ebtekar shook a man’s hand while visiting her counterpart Hendricks in Berlin.Iran’s Tasnim news agency reported on Friday that Hendric ks is a woman who “looks like a man.” Tasnim is linked to the Iranian Revolutionary Guard.Iran’s radical theological state prohibits hand contact between a religious woman and a man who does not know her. Tehran also mandates a public policy of strict separation between men and women.“This handshake [created an] uproar for [a] few hours in conservative media & social network pages. They thought the #Germanminister is a man. #Iran,” wrote Sadegh Ghorbani, a Tehran- based journalist, on his Twitter feed.Ebtekar served as the spokeswoman for the Iranians who took 52 Americans hostage in 1979 and seized the US Embassy.She spoke at an al-Quds demonstration in 2016, which calls each year for the destruction of Israel. She is an unwavering supporter of Hamas and Hezbollah.Christian Democratic Union MP Thomas Feist told Germany’s largest daily Bild that Ms. Ebtekar does not stand “for change in Iran.” He said one should be more careful about the selection of a dialogue partner.Germany’s LGBT press reported on the case of alleged homophobia because Hendricks is a lesbian. The website Queer.de wrote that Hendricks announced she was a lesbian in 2013 and is the first lesbian in German history to serve as a federal minister.The NGO Stop the Bomb, an organization that seeks to end Iran’s nuclear program and improve human rights in the country, tweeted on Friday, “Disgraceful: Lesbian German minister happily signed deals with regime of Iran that executes homosexuals.”According to a 2008 British WikiLeaks dispatch, Iran executed 4,000 to 6,000 gays and lesbians between 1979, the founding of the Islamic Republic, and 2008. Iran’s regime prescribes the death penalty for gays as part of Islamic Shari’a law system.In July, Iran hanged Hassan Afshar, 19, a gay teenager.Stefan Schaden, a LGBT rights activist with the Stop the Bomb campaign, told The Jerusalem Post at the time, “Consensual homosexual conduct remains illegal under Iran’s Shari’a law and is punished with public flogging or even execution.While the Islamic State throws gays from rooftops, the Islamic Republic [of Iran] hangs them.”