The Islamabad High Court ordered the media to "ensure that nothing about the celebration of Valentine's Day and its promotion is spread." 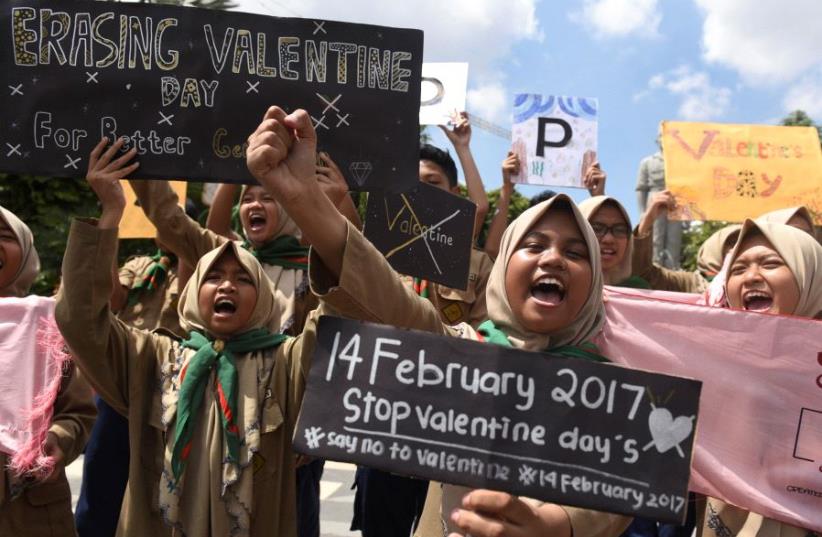 Muslim students shout slogans during a protest against Valentine's Day celebrations in Surabaya, Indonesia, February 13, 2017
(photo credit: REUTERS)
Advertisement
JAKARTA/ISLAMABAD - Valentine's Day celebrations on Tuesday were banned by authorities in parts of Indonesia and Pakistan, home to Asia's largest Muslim populations, saying the romantic tradition encouraged casual sex and ran counter to cultural norms.In Indonesia, officials from the country's second largest city, Surabaya, ordered schools to prohibit students from celebrating Valentine's Day, while in Makassar, police raided mini marts and seized condoms in a bid to prevent teenagers from having sex."These raids were done after we received reports from residents that the mini marts were selling condoms in an unregulated way, especially on Valentine's Day," Makassar police official Jufri was quoted as saying in a media report.Indonesia's highest Islamic clerical council declared Valentine's Day forbidden by Islamic law in 2012, saying it was contradictory to Muslim culture and teachings.But the vast majority of Indonesia's more than 220 million Muslims follow a moderate form of Islam in a country with sizeable Christian and Hindu minorities. Indonesia is a secular country whose state ideology enshrines religious diversity.In Indonesia's capital, Jakarta, and other parts of the country, Valentine's Day has grown in popularity with companies, like national flag carrier Garuda Indonesia, looking to cash in by offering special discounts and promotions.In Pakistan, an Islamic republic, a court banned public Valentine's Day celebrations in its capital.The Islamabad High Court also ordered the media to "ensure that nothing about the celebration of Valentine's Day and its promotion is spread."That hurt some businesses in the city of 2 million people."I've sold at least 50 percent less flowers today than in past years. People just haven't come out to buy them," said Haider Ali, who works at the F7 flower market in Islamabad.