The protesters called for Abbas’s resignation and chanted slogans denouncing his decision, which came in response to PFLP criticism of his policies. 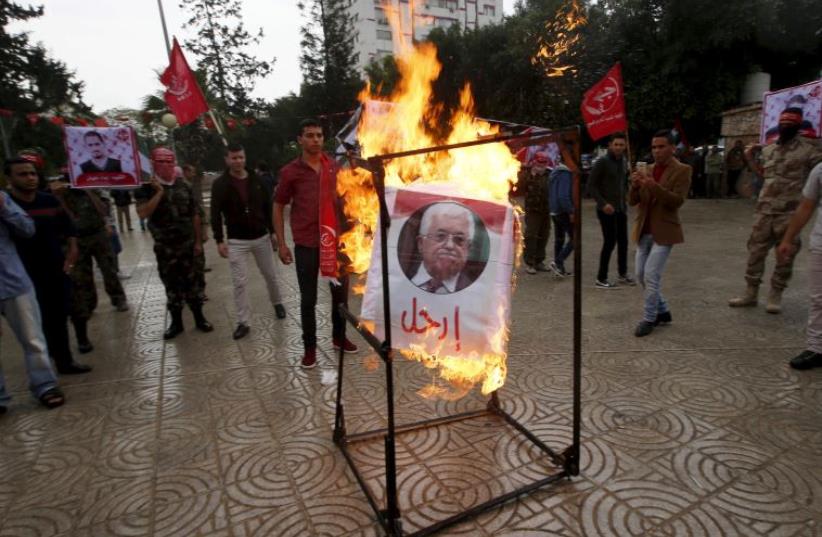 Supporters of the Popular Front for the Liberation of Palestine (PFLP) burn a poster of Palestinian President Mahmoud Abbas during a protest against Abbas's policies, in Gaza City April 12, 2016
(photo credit: REUTERS)
Advertisement
Members of the Popular Front for the Liberation of Palestine (PFLP) on Tuesday burned photos of Palestinian Authority President Mahmoud Abbas in the Gaza Strip.The PFLP members were protesting Abbas’s decision to suspend PLO funding for their group.The protesters called for Abbas’s resignation and chanted slogans denouncing his decision, which came in response to PFLP criticism of his policies.The Marxist PFLP is the second largest group in the PLO after Abbas’s Fatah faction.The PFLP protest in the Gaza Strip was organized to mark the 40th day of the death of the group’s member, Omar al-Nayef, whose body was discovered inside the Palestinian embassy in Bulgaria earlier this year.The PFLP has held the PA fully responsible for the death of al-Nayef, who was wanted by Israel for his role in the murder of a yeshiva student in the Old City of Jerusalem in 1986.The protesters also demanded that Israel release the bodies of Palestinian assailants who were killed in recent months. The PFLP activists carried coffins with the names of the assailants, who were killed during attacks on Israelis in Jerusalem and the West Bank.The PFLP and several Palestinian factions have strongly condemned Abbas’s decision to suspend the funds, dubbing it “political extortion.”The PFLP received monthly funding from the Palestinian National Fund, a body controlled by Abbas loyalists.Fatah leaders denounced the burning of Abbas’s posters on the streets of the Gaza Strip and said it was part of an unacceptable smear campaign against the PA president.