The landlords of the destroyed homes gathered Sunday morning outside the building of the Ministry of Public Works and Housing. 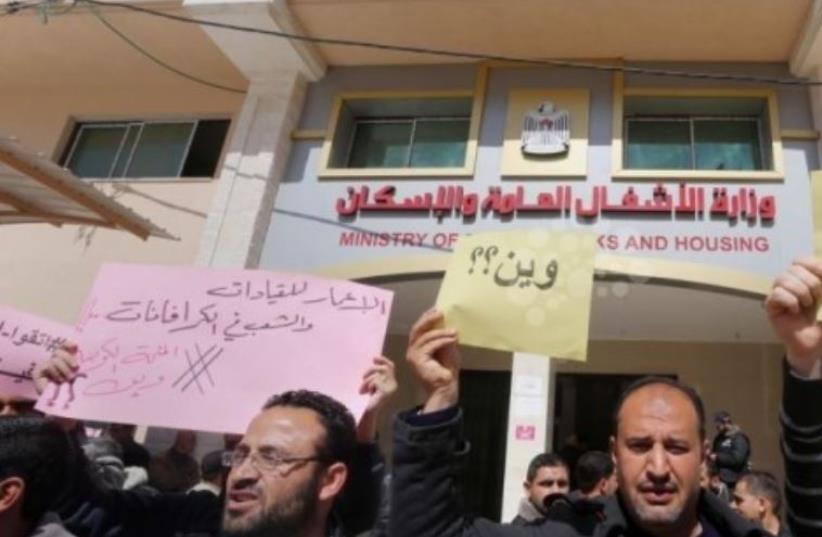 The demonstration outside the Ministry of Public Work and Housing on Sunday
(photo credit: PALESTINIAN MEDIA)
Advertisement
Dozens of Gazans, whose homes were destroyed by Israeli bombing in the 2014 Gaza war, have demanded the Palestinian Authority immediately pay them Kuwaiti grant money for the reconstruction of Gaza on Sunday.The landlords of the destroyed homes gathered Sunday morning outside the building of the Ministry of Public Works and Housing, raising banners demanding that the Emir of Kuwait Sheikh Sabah al-Ahmed al-Sabah intervene and force the Palestinian Authority to release the grant to the residents whose homes were destroyed.During a Gaza donor conference that took place in November 2014, the Kuwaiti government announced that it would grant $200 million dollars for Gaza reconstruction.  "The unity government headed by Rami Hamdallah did not fulfill its promises to the Kuwaiti grant beneficiaries and decided to postpone the subject," Umm Radi al- Nagar, a 60-year-old resident who participated in the demonstration told al-Arabi al-Jadid news site. Ghazi Mohammad Halasa, a Gazan resident that became paralyzed following the Israeli bombardments, said that the Palestinian government has not granted the landlords whose homes were ruined any financial aid to help them reconstruct their homes.According to the statistics collected by the Ministry of Public Work and United Nations Development Program (UNDP) approximately 12,000 homes were destroyed during the 2014 Gaza war between Israel and Hamas fighters in Gaza.