Speaking in an interview with Bild newspaper, Thomas de Maiziere said there were currently at least 520 "potential attackers" in the country. 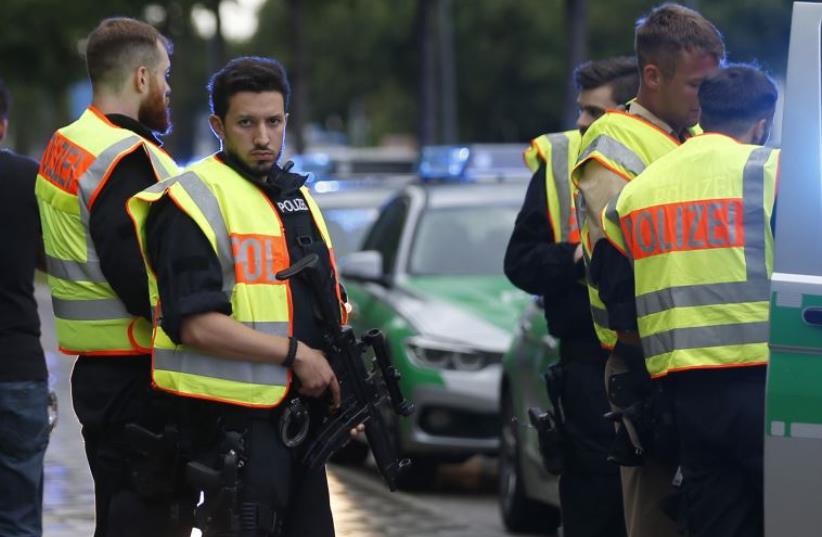 Police secure a street near to the scene of a shooting in Munich, Germany July 22, 2016
(photo credit: REUTERS)
Advertisement
BERLIN - Germany's interior minister has warned that the country is home to more than 500 Islamic militants who could be capable of carrying out assaults on their own or as members of "hit teams."Speaking in an interview with Bild newspaper, Thomas de Maiziere said there were currently at least 520 "potential attackers" in the country, which has been on edge since two Islamic State-inspired attacks in July.He said another 360 "relevant" people were known to police because of their close proximity to the potential attackers.Many Germans fear that fighters belonging to the Islamic State jihadist group could have slipped into Germany with the roughly one million of refugees from Syria, North Africa and Asia who arrived last year."The terror threat now stems from foreign hit teams as well as fanatical lone wolves in Germany," de Maiziere said in the interview ahead of the 15th anniversary of the 9/11 attacks in the United States, which were partly coordinated from Germany."The hit teams are secretly smuggled into Europe and prepare their actions withoug being noticed, as we saw with the attacks in Paris and Brussels," he added. "But it's even more difficult to uncover the fanatical lone wolves. Unfortunately, there is a real and present danger from both threats."He said security authorities were doing everything possible to monitor "the potential terrorists" and noted that there have been more investigations and arrests this year. Despite their efforts, he said, "the authorities are assuming there are undiscovered lone wolf terrorists out there."Germany had until July been spared the kind of militant attacks suffered by neighbouring France and Belgium. But in late July, Islamic State claimed two attacks -- on a train near Wuerzburg and at a music festival in Ansbach -- in which asylum-seekers wounded 20 people in total.The anti-immigrant party Alternative for Germany (AfD) has seized on the attacks to criticise Chancellor Angela Merkel's migrant policies.