A splinter group of the Pakistani Taliban called Jundullah claimed responsibility for the attack. 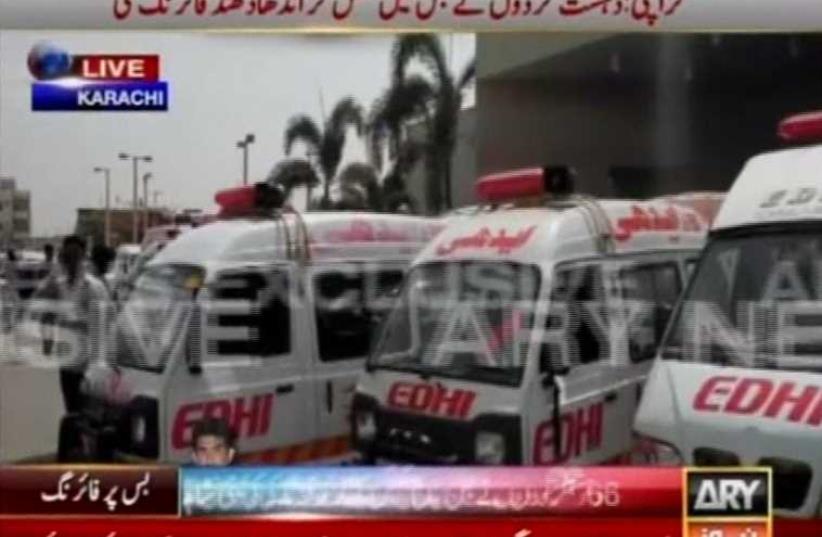 Motorcycle gunmen kill 41 in bus attack in Pakistan's Karachi
(photo credit: screenshot)
Advertisement
Gunmen on motorcycles boarded a bus and opened fire on commuters in Pakistan's volatile southern city of Karachi on Wednesday, killing at least 43, police said, in the latest attack directed against religious minorities this year.The pink bus was pockmarked with bullet holes and blood saturated the seats and dripped out of the doors on to the concrete."As the gunmen climbed on to the bus, one of them shouted, 'Kill them all!' Then they started indiscriminately firing at everyone they saw," a wounded woman told a television channel by phone.Police Superintendent Najib Khan told Reuters there were six gunmen and that all the passengers were Ismailis, a minority Shi'ite Muslim sect. Pakistan is mostly Sunni.Militant group Jundullah, which has attacked Muslim minorities before, claimed responsibility. The group has links with the Pakistani Taliban and pledged allegiance to Islamic State in November."These killed people were Ismaili and we consider them kafir (non-Muslim). We had four attackers. In the coming days we will attack Ismailis, Shi'ites and Christians," spokesman Ahmed Marwat told Reuters.At least 43 people had been killed and 13 wounded, provincial police chief Ghulam Haider Jamali told media.Outside the hospital where the wounded were taken, and where the bus was parked, scores of grim-faced young men formed a human chain to block everyone but families and doctors.Emails and Facebook posts on Ismaili pages encouraged the community not respond or say anything that might further endanger them.Prime Minister Nawaz Sharif said he was saddened by the attack."This is a very patriotic and peaceful people who have always worked for the wel-lbeing of Pakistan," he said. "This is an attempt to spread divisions in the country."

MILITANT THREATSUzma Alkarim, a member of the Ismaili community, said the bus took commuters to work every day. The Ismailis had faced threats before, she said."Around six months ago, our community elders had alerted us to be careful because of security threats but things had calmed down recently," she said.English leaflets left in the bus were headlined "Advent of the Islamic State!" and used a derogatory Arabic word for Shi'ites, blaming them for "barbaric atrocities ... in the Levant, Iraq and Yemen".The leaflets also blamed Shi'ites for a deadly sectarian attack in Rawalpindi, next to the capital Islamabad, and raged against extrajudicial killings by police.In January, 60 people were killed when Jundullah bombed a Shi'ite mosque in the southern province of Sindh. The Taliban bombed another Shi'ite mosque in the northwest city of Peshawar weeks later.Both the Taliban and Jundullah claimed the bombing of Wagah border crossing last year, which killed 57 people. Jundullah also claimed a church bombing that killed more than 80 people in Peshawar in 2013.Many religious minorities blame the government for not doing enough to protect them. Police are underpaid, poorly equipped and poorly trained.Karachi, a megacity of 18 million that is Pakistan's financial heart, is also under the responsibility of the paramilitary Rangers.