Hamas kills Salafist supporter of ISIS after besieging his home

Tensions between Hamas and hard line religious Salafists have been rising in recent months, with over 100 alleged ISIS supporters being arrested so far. 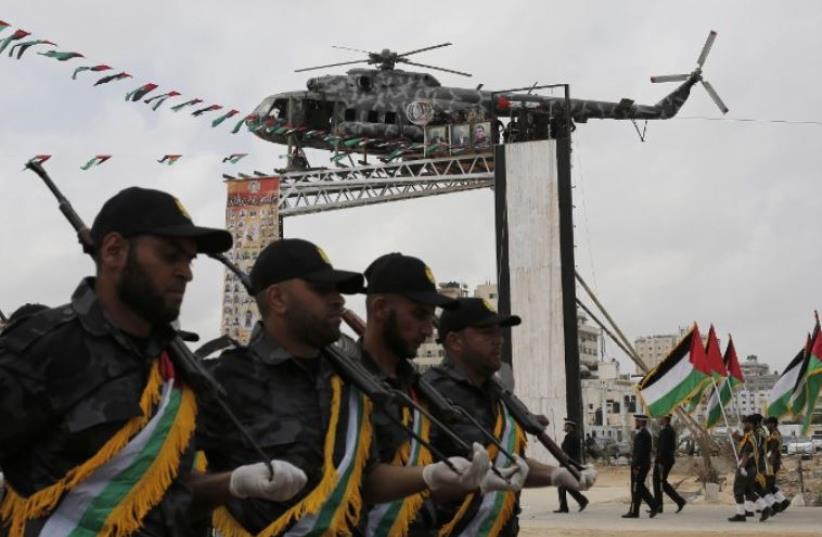 Hamas security forces march during a military review near a recently installed statue of a renovated helicopter belonging to late Palestinian leader Yasser Arafat
(photo credit: MOHAMMED ABED / AFP)
Advertisement
Hamas security forces killed an activist of a rival Islamist militant group in a shoot-out at his Gaza home on Tuesday, witnesses said.A spokesman for the Hamas-run Interior Ministry identified the man, Younis al-Honnor, only as a "lawbreaker", and said he was shot dead after firing at security officers who came to arrest him.Local residents who witnessed the incident said Honnor was an activist in a Salafi group.Hamas, an Islamist militant movement that governs the Gaza Strip, has mounted occasional crackdowns on rival and more radical Salafi groups that support global holy war endorsed by Islamic State and al-Qaida."(Honnor) had booby-trapped the house he was in. Explosive belts, explosive devices and rifle-propelled grenades were found inside," the spokesman said.Tensions between Hamas and hard line religious Salafists have been rising in recent months, with over 100 alleged ISIS supporters being arrested so far, according to Israel Radio.
Groups such as The Salafist Trend, who use social media to express their support for the Islamic State, accuse Hamas of torturing its members in prisons, monitoring its activities in cities and tracking its movements across refugee camps throughout Gaza, according to Palestinian media.
Palestinian news agency Ma'an cited a press release issued by the group last month warning Hamas of the consequences of continuing there activity against The Salafist Trend."Once again we ask the wise people of Gaza to stop the ongoing Hamas criminality and abusive detention of our brothers before it's too late," the statement read.Hamas has cracked down on Salafist groups in the past, particularly those on the violent fringes, seeing them as a threat to their authority.
Advertisement
Subscribe for our daily newsletter