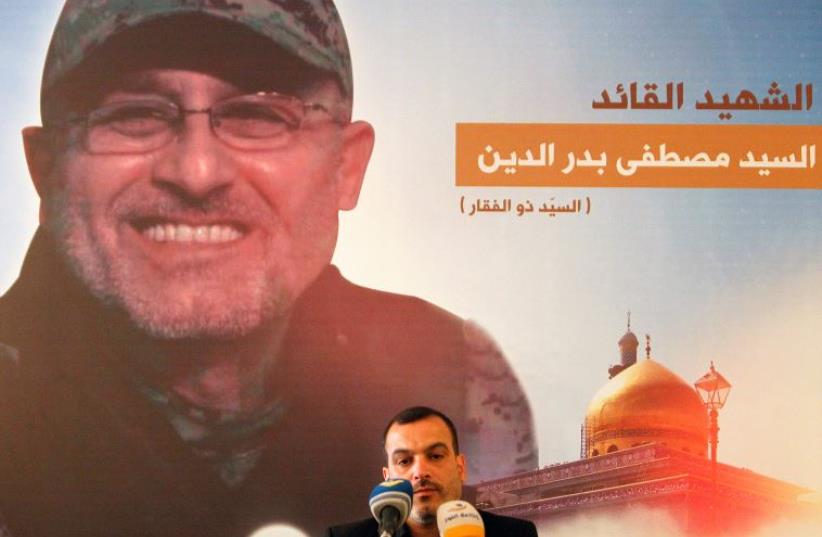 A man reads the Koran in front of a picture depicting top Hezbollah commander Mustafa Badreddine
(photo credit: AZIZ TAHER/REUTERS)
Advertisement
Nawar al-Saheli, a Hezbollah member of Lebanon's parliament, accused Israel on Friday of being responsible for the death of their top commander, Mustafa Amine Badreddine, and called the attack part of an "open war." "We do not want to get ahead of the investigation, but there is no doubt that Israel was behind his death," the MP told Hezbollah-controlled TV station Al-Manar. "The resistance will carry out its duties at the appropriate time," he added. Cabinet minister Zeev Elkin, a confidant of Prime Minister Benjamin Netanyahu, declined to comment on the allegations in a interview with Army Radio. Hezbollah has not publicly placed blame on Israel. The terror group confirmed Badreddine had been killed in a big explosion targeting one of its bases near Damascus airport, and an investigation was underway into whether it was caused by an air strike, a missile attack or artillery bombardment. It did not say when he was killed.Yaakov Amidror, a former national security adviser to Netanyahu, said Badreddine's killing was good news for Israel but stopped short of saying Israel was responsible."We don't know if Israel is responsible for this," he told Israel's Army Radio. "Remember that those operating in Syria today have a lot of haters without Israel.""But from Israel's view, the more people with experience, like Badreddine, who disappear from the wanted list, the better," he said.Israel considers Hezbollah its most potent enemy and worries that it is becoming entrenched on its Syrian front and is acquiring more advanced weaponry. Israel has struck Hezbollah targets in Syria several times since the conflict began in 2011. Hezbollah, a political and military movement which is Lebanon's most powerful group, has grown stronger since forcing Israel to end its 22-year occupation of southern Lebanon in 2000. The sides fought a 34-day war in 2006, their last major conflict.Reuters contributed to this report.