Lebanon has worked out a complicated system to include the three major religious groups in the country in its political process: Shia Muslims, Sunni Muslims, and Maronite Christians. 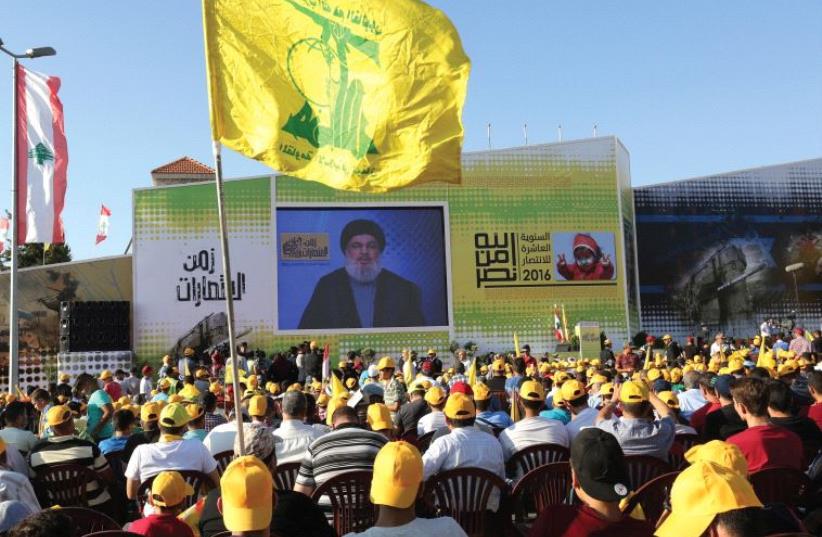 Supporters of Hassan Nasrallah listen to the Hezbollah leader via a screen during a rally marking the 10th anniversary of the end of the 2006 war with Israel, in Bint Jbeil, southern Lebanon, August 13
(photo credit: REUTERS)
Advertisement
With a five-year civil war grinding on in next-door Syria and a flood or refugees, coupled with high unemployment and growing debt, Lebanon is facing increasing political instability. For more than two years, and despite dozens of efforts, the Lebanese parliament has failed to elect a new president, who according to Lebanon’s laws, must be a member of the Christian minority.“The tone is pretty grim because we have two million refugees and the war in Syria is really affecting political instability,” Carmen Geha, an associate professor at the American University in Beirut, told The Media Line. “One of the Lebanese parties is actively fighting within Syria and we have not had presidential elections.” She was referring to Hezbollah, the Shi’ite terrorist group, which has been actively fighting in Syria on behalf of Syrian President Bashar al-Assad. Hezbollah also plays an important role in Lebanon, as both a political party and a social welfare organization especially in south Lebanon. Critics say that Hezbollah has been trying to delay presidential elections as it seeks electoral reform that will give it more power. The parliament, whose term expired in 2013, has postponed elections until 2017. And, there has been no President of Lebanon for 28 months. “There is a lot of political activity going on in Lebanon right now,” Hilal Khashan, chair of the department of political studies and public administration at the American University in Beirut, told The Media Line. “But, to tell you the truth, it is ungainly political activity because I don’t think it will amount to much. I don’t think we are about to elect a new president.” Lebanon has worked out a complicated system to include the three major religious groups in the country in its political process: Shia Muslims, Sunni Muslims, and Maronite Christians. The presidential position is reserved for a Maronite Christian and he serves as both head of state and head of the armed forces; however, this position has become more symbolic than political. The last president of Lebanon, Michel Suleiman, left office in May 2014. Since then, the parliament has failed to replace him over 40 times. Currently, the most prominent presidential contender is Michel Aoun, founder of the Free Patriotic Movement. In 2006, Aoun and Hezbollah created an alliance to diminish the power of Sunni Muslims in the country. Since then, analysts say, Hezbollah has remained aligned with Aoun so as not to be seen as an extremist party. According to Khashan, Hezbollah wants to be on good terms with Aoun but it does not want him becoming president because it wants to push through electoral change that would give Hezbollah more power.  Politically, there are currently two “package deals” in the country. The first is an agreement between Presidential candidate Michel Aoun and ex-Prime Minister Saad Hariri to support each other. “Aoun has made it obvious that if he is nominated by Hariri (to be president), he would help enable Hariri to become prime minister. Essentially, you help me become president and I help you become Prime Minister again,” Khashan said. “(They are) two men who are desperate for political office.” Hariri, who had campaigned to nominate Marada Movement Chief Suleiman Franjieh as president in 2015, recently returned from a two month jaunt to Europe and Saudi Arabia.