How the Syrian civil war will look post-Islamic State

As US-backed forces make advances against the Islamic State, concern mounts over the possibility of another humanitarian catastrophe in Syria. 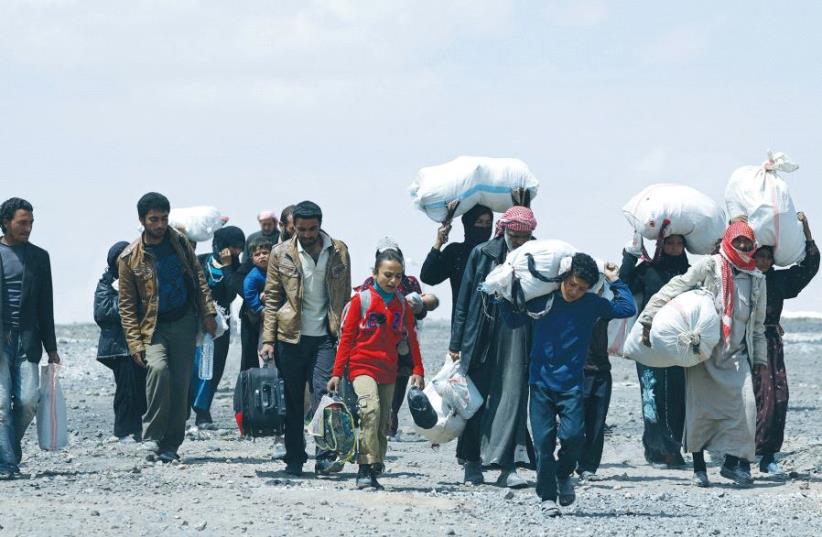 PEOPLE WHO FLED Raqqa city carry their belongings as they leave a camp in Ain Issa, in Syria’s Raqqa governorate, on Thursday.
(photo credit: RODI SAID / REUTERS)
Advertisement
A military offensive targeting the capital of the Islamic State's self-declared "caliphate" is paying dividends, with Brett McGurk—US special envoy for the coalition against the Islamic State—revealing that about 45% of Raqqa has been recaptured. "Today, [the Islamic State] is fighting for every last block…and fighting for its own survival," he affirmed. "They most likely will die there."The US-backed Syrian Democratic Forces—mainly compromised of Kurdish militias known as YPG—launched an operation on June 6 to liberate Raqqa, which was seized by Islamic State in 2014. The loss of its "headquarters" would be a second consecutive major setback for the jihadist group, which was driven from its Iraqi bastion of Mosul last month.In total, McGurk stated that the Islamic State has lost 78% of the territory it previously held in Iraq and 58% in Syria. The envoy attributed "dramatically accelerated" progress in the campaign to positive changes implemented by US President Donald Trump. The key factors cited were the White House's willingness to delegate decision-making to battlefield commanders; the application of a so-called "annihilation" tactic, in which coalition ground forces surround Islamic State strongholds so that enemy fighters cannot escape; and a push to increase the burden-sharing among the 73 members of the anti-Islamic State coalition.Speaking to The Media Line, Dr. Ely Karmon, a Senior Research Scholar at Israel's International Institute for Counter-Terrorism, predicted that Raqqa will inevitably fall; after which, there will be an effort by the Islamic State to relocate and reorganize. "Afghanistan will be a very important place for the Islamic State, which has upped its activities there already, including the [May 31] bombing in Kabul that killed [over 150 people and wounded over 400 others]. They are also already in Libya, where leaders have been dispatched. There is Yemen, where so far the Islamic State has not been as successful because al-Qaida controls territory." Moreover, Dr. Karmon noted Iraqi intelligence reports suggesting Islamic State is already trying to regroup in the country after its defeat in Mosul—by organizing underground, clandestine operations to attract the support of local Sunni fighters who remain engaged in conflict with Shia militias.While Dr. Karmon acknowledges that the Islamic State "will be more scattered" once Raqqa falls, he nevertheless contended that "the terror group was always largely decentralized, as most of its associates and factions were quite independent." Accordingly, "there is no doubt that the Islamic State will try to encourage [so-called 'lone wolf'] attacks on the US and EU, as this is one of their best weapons."Nature abhors a vacuum and what comes after the Islamic State in Raqqa may yet spell trouble, with analysts predicting that competing entities will wage subsequent battles to fill the void. The likely scenario will pit American-backed Kurdish and Arab rebels against those supported by Turkey, which is committed to preventing the Kurds from carving out an autonomous enclave along the shared Turkish-Syrian border. There is also the Assad regime's army, which coupled with Iranian-backed militias will likewise press to secure their own interests.Fears over the prospect of another humanitarian disaster are thus rising. The immediate focus is the battle for Raqqa City itself, where the United Nations estimates that between 20,000 and 50,000 civilians remain. Speaking to The Media Line, David Swanson, an Information Officer at the UN's Regional Office for the Syria Crisis, confirmed that "as military operations continue, our concern is further civilian casualties; all the more so as Islamic State [another acronym for the Islamic State] has allegedly used civilians as human shields."With respect to the "day-after-liberation" plan US envoy McGurk recently alluded to, Swanson revealed that "in the period after ISIL is pushed out [of Raqqa City], and as soon as conditions permit access, UN activities are foreseen to focus on urgent life-saving assistance for 90 days.… It is expected that the majority of civilian infrastructure, such as health facilities and schools, will be found looted, damaged and/or destroyed. [Improvised Explosive Device] contamination is also expected to be high, making the early response particularly challenging."As per the larger numbers of people already displaced throughout the province, Swanson continued, "humanitarian partners have developed and are regularly updating a plan for Ar-Raqqa Governorate which outlines preparedness and response to meet the needs of an estimated 440,000 people who may be affected by the offensive." These and many more may indeed find themselves in the cross hairs of the current battle, or ensuing ones.The Syria conflict, now in its seventh year, is one of the most complicated crises—both geopolitically and in terms of human suffering—since World War II. On one side of the equation, the primary players are U.S.-backed Sunni Gulf Arab states, led by Saudi Arabia, as well as Turkey; on the other is the Syria-Iran-Hezbollah Shiite axis, supported by Russia. On the ground are dozens of fighting groups, fluid in nature, with ever-changing loyalties, and some more extreme than others. The obvious complexities that have evolved have created a veritable Gordian Knot, a quagmire with no apparent "out-of-the-box" solution, even when taking into consideration the prospective victory over the Islamic State.More than 400,000 civilians have lost their lives in this maze of human misery, with another 11 million displaced and nearly 15 million in urgent need of life-saving assistance. For many observers, the unending carnage is a blight on humanity itself—a tragedy which, in this so-called modern day and age, could never have happened until it did.For more stories on the Media Line, click here.