By JPOST.COM STAFF
NOVEMBER 24, 2014 09:56
Isis-affiliated Twitter poster
(photo credit: SOCIAL MEDIA)
Advertisement
In its latest stunt to garner support, the extremist Islamic State group has allegedly used graphic stills from a Hungarian pornography film to misleadingly portray the abuse of Sunni Muslim women. Various social media accounts claiming affiliation with the group formerly knows as ISIS have posted a propaganda poster proclaiming that "Islamic State is the sole saviour of millions of Sunni Muslims against Iraqi-Syria army butchers [sic]."One photograph displayed on the poster shows men in military uniforms sexually abusing a woman purportedly claimed to be a Sunni Muslim. The image is accompanies by a caption that reads: "no more watching brothers dies no more watching sister cray..[sic.]" 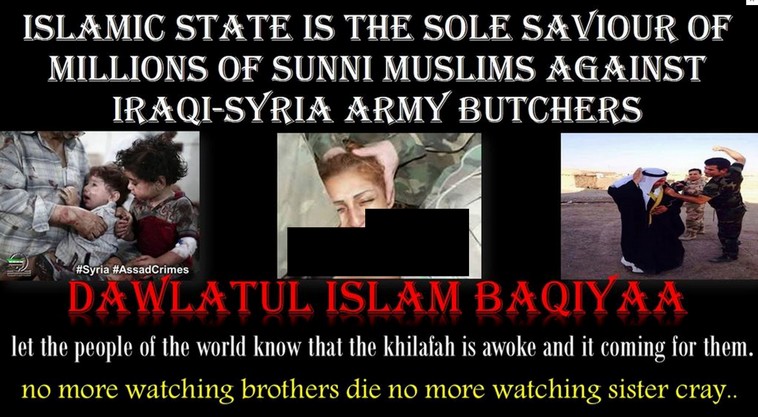 
The 'Think Again Turn Away' account rejected as bogus the propaganda material posted by a said affiliate of the radical jihadist group that has violently taken control of beleaguered parts of Syria and Iraq in its quest to reinstate a medieval caliphate across the Middle East. The United State has been leading a campaign of air strikes in Iraq and Syria against the rising threat of Islamic State insurgents, infamous for the gruesome beheading of those they see as opponents - including five Western captives.
Advertisement
Subscribe for our daily newsletter