The bag features bold Arabic script along its side, which translates to: “This text has no other purpose than to terrify those who are afraid of the Arabic language.” 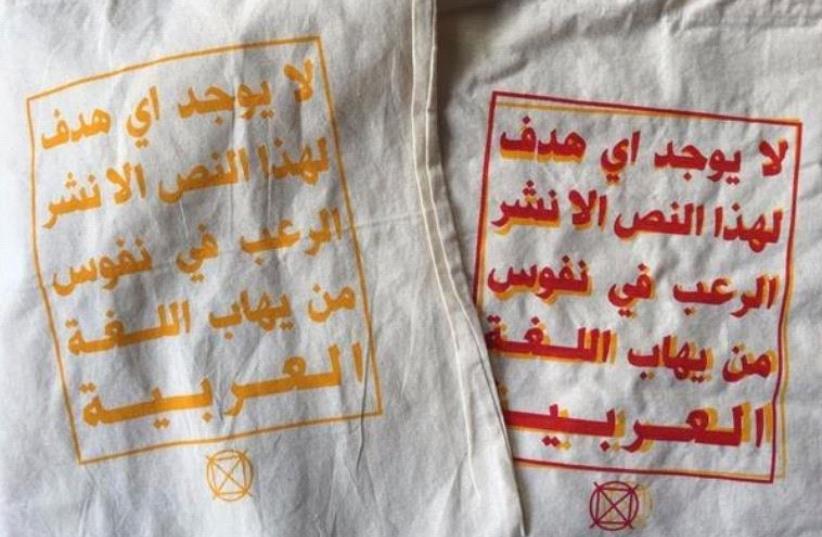 tote bag designed by an Israeli-Arab design studio
(photo credit: ROCK PAPER SCISSORS)
Advertisement
An image of a tote bag designed by an Israeli-Arab design studio has gone viral for its humorous play on anti-Arab stereotypes.The bag features bold Arabic script along its side, which translates to: “This text has no other purpose than to terrify those who are afraid of the Arabic language.”A photo of the bag has struck a nerve with many social media users after journalist Nader Sarras snapped a photo of man wearing the tote bag on the Berlin subway last week.Images of the bag have garnered over 35,000 likes on Facebook and 120,000 likes on Twitter.The Haifa-based design studio Rock Paper Scissors is responsible for the bag, which sells for $15 on their website.Sana Jammalieh and Haitham Charles Haddad two friends who met at the Shenkar College of Engineering, Design and Art in Tel Aviv run the design studio.In an interview with AJ+, an affiliate of Al Jazeera, Haddad said the bag was meant to challenge peoples’ perception of the Arabic language and “kind of make fun of those who are afraid of the language.”Jammalieh contended that the bag is a pushback against generalizations of Arabs. “What I would like to tell people: give Arabs a break. Forget about the stereotypes,” she stated.  “Arabic language and culture are beautiful things that are full of love.”