In Ghouta's shelters, terrified Syrians await the next bomb

Under cracked ceilings that bulge downwards from the force of previous strikes, 400,000 civilians tremble from the ceaseless bombs.

By REUTERS
MARCH 12, 2018 11:56
Syrian Army Forces Intensify Assault On Eastern Ghouta, March 11, 2018
Advertisement
BEIRUT - As the Syrian army pushes deeper into eastern Ghouta under cover of a hammering bombardment, the 400,000 civilians the United Nations says live in the enclave have crowded into dark basements to cower from the ceaseless bombs.Under cracked ceilings that bulge downwards from the force of previous strikes, they string sheets across the basement to partition off rooms for entire families."Look at it. It is completely uninhabitable. It is not even safe to put chickens in. There is no bathroom, just one toilet, and there are 300 people," said a man in a shelter in the region's biggest urban center, Douma.Like the other people in the shelter, he did not want to give his name for fear of reprisals as the army attempts to retake the rebel enclave.Syrian President Bashar al-Assad and his strongest ally Russia have said the onslaught on eastern Ghouta is needed to end the rule of Islamist insurgents over civilians there and to stop mortar fire on nearby Damascus.But the intensity of the offensive, which the Syrian Observatory for Human Rights says has killed 1,160 people in three weeks, has provoked condemnation from Western countries and pleas from U.N. agencies for a humanitarian halt.The assault began with one of the fiercest bombardments of the war, as war planes, helicopters and artillery rained down a near-constant stream of missiles, bombs, rockets and shells.It targeted an area that has been besieged since 2013, and where dire shortages of food and medicine have caused severe malnutrition and ravaging illness.After the bombs began to fall three weeks ago, people feared to leave the shelters even to seek the meager remaining supplies of food. 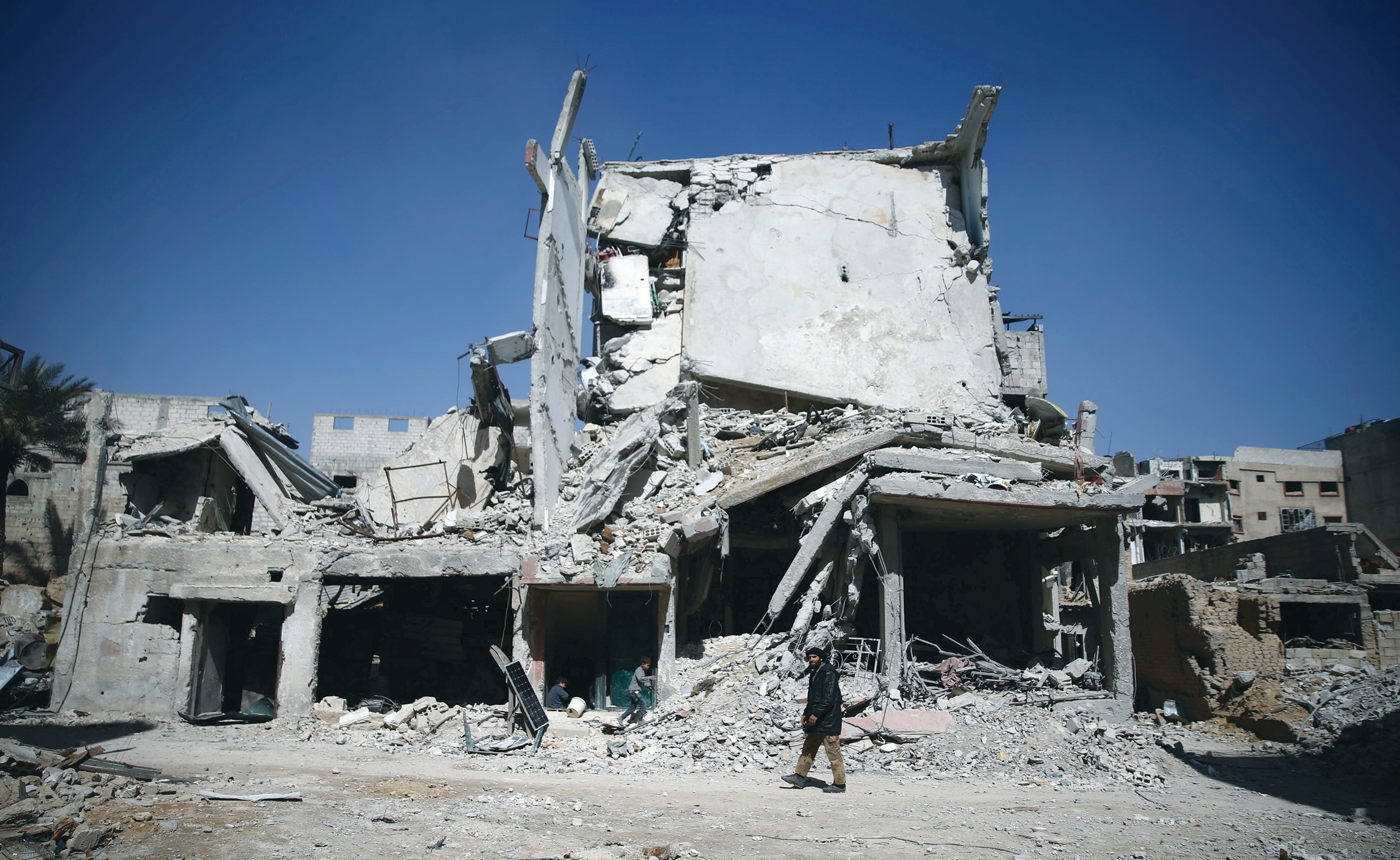 Mass destruction in eastern Ghouta (Reuters)CHILDRENThe shelter was in two stories of a basement and very crowded. Small children were everywhere, chatting and playing in the maze-like corridors between the hanging sheets.Inside the makeshift rooms, thin mattresses and blankets lay on the floor. Some people tried to sleep. In one corner, a man sat up for the arrival of a medic, there to treat his injuries from a previous bomb attack.Long cuts were visible on his shoulder and the crown of his head, which the medic cleaned.Small children helped with washing up - rinsing foamy detergent off stainless steel dishes with dirty water from a small jug.In such conditions, hygiene becomes increasingly hard to maintain."Three hundred people living in danger and we are forced to live like this... old and young and sick," said the man.From another part of the shelter, a man could be heard calling for the mother of a boy who had soiled himself, something people there said had grown more common as fear set in.Many of the people huddled in Douma's shelters had already fled from other parts of the enclave, some of them many times over to escape the ever-shifting front lines.In recent days tens of thousands more people have arrived in the town after rushing from the latest rapid advances by the Syrian army."My son was martyred and my husband is wounded... We have spat blood, as they say," said a woman in the shelter.Overhead, steel rebar was visible in the large cracks and depressions of a concrete ceiling that seemed poised to collapse over the shelter's terrified inhabitants at any new blast nearby."If anyone is listening, (think of) the Syrian children in Ghouta. The whole world, even the Arab countries, have abandoned them. We want God to help us. We are so tired. Pray for us, pray for us," she said.