"We cannot manage the world through aid relief in the place of diplomacy and diplomatic solutions," said Jolie. 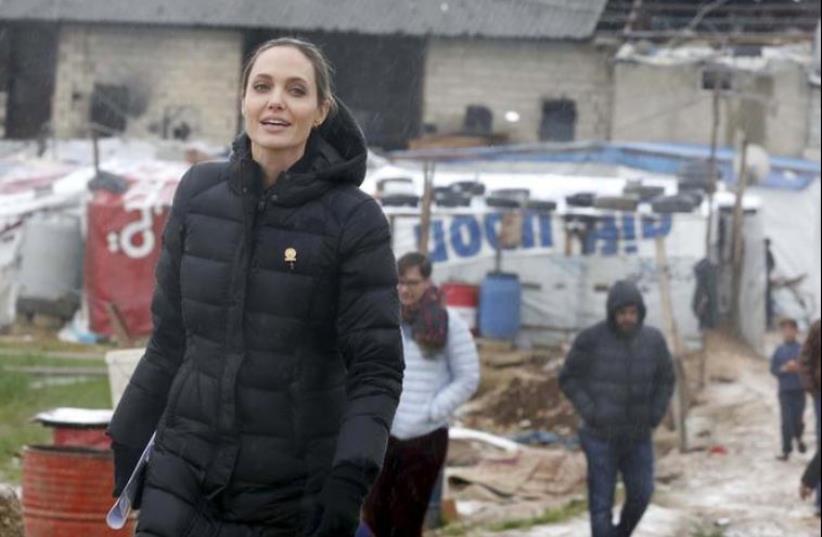 United Nations High Commissioner for Refugees (UNHCR) Special Envoy Angelina Jolie visits Syrian refugees in the Bekaa valley, Lebanon March 15, 2016. March 15 marks the 5th anniversary of peaceful protests against President Bashar al-Assad, leading to the devastating civil conflict in the country.
(photo credit: REUTERS)
Advertisement
SAADNAYEL - UN special envoy Angelina Jolie urged world powers on Tuesday to do more to end Syria's five-year war and help the millions who have fled the conflict, as she visited refugees in Lebanon's Bekaa Valley.The war has killed 250,000 people, displaced half of Syria's population and created Europe's worst refugee crisis since World War Two. Talks on a political solution are underway in Geneva, but hopes of progress are modest.As a diplomatic solution eludes politicians, simply coping with the growing humanitarian crisis is not a viable alternative, Jolie said."We cannot manage the world through aid relief in the place of diplomacy and diplomatic solutions," she said at a muddy camp in Saadnayel, about 15 km from the Syrian border. Refugees gathered around, bracing against heavy rain and wind."We need governments around the world to show leadership: to analyze the situation and understand exactly what their country can do, how many refugees they can assist and how."Highlighting the huge refugee influx into Syria's immediate neighbors, which have been hosting millions of refugees, she said the problem was not "confined to the situations of tens of thousands of refugees in Europe".Turkey, Jordan and Lebanon host the vast majority of the 4.8 million refugees created by the conflict. The one million registered refugees in Lebanon represent a quarter of the country's population."The greatest pressure is still being felt in the Middle East and North Africa," Jolie said.European Union leaders, alarmed by an influx of 1 million refugees and migrants into the bloc of 500 million people, have sketched an accord with Turkey, that would grant Ankara more money to keep the 2.7 million Syrian refugees on its territory.The vast majority of Syrian refugees in Lebanon live in extreme poverty, the United Nations says. Jolie, special envoy for UN refugee agency UNHCR, said 80 percent were in debt, after any savings they brought from Syria had run out.UNHCR says there are likely more than 60 million people forcibly displaced worldwide - one in every 122 people.Syria's conflict has also created 2.4 million child refugees, killed many and led to the increasing recruitment of children as fighters, children's fund UNICEF said in a report to mark the five-year anniversary.