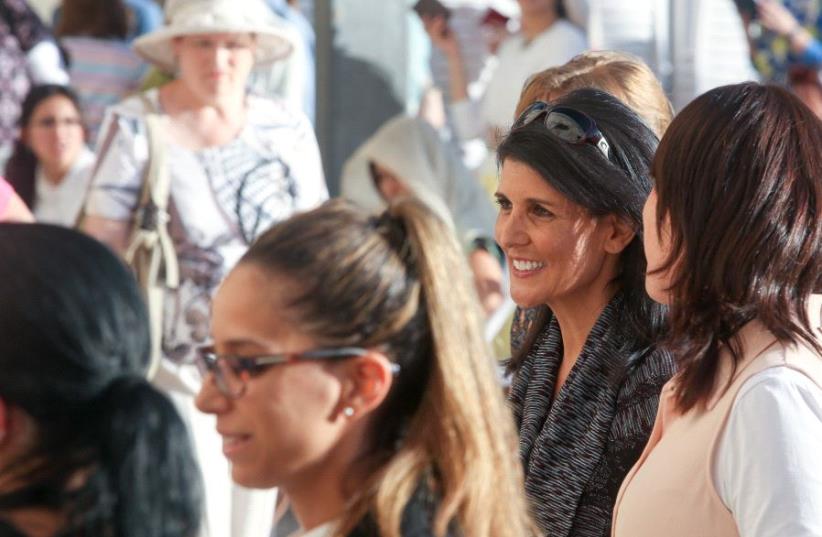 Nikki Haley at the Western Wall
(photo credit: MARC ISRAEL SELLEM)
Advertisement
US Ambassador to the United Nations Nikki Haley made the rounds among the next generation of Israelis and Palestinians during her recent three-day visit to the region. The American envoy took to Facebook over the weekend to post some photographs of "some of the faces we saw during our trip.""The Israeli and Palestinian people we met all had hopes and dreams of a promising future for this region. #peace," she wrote in an optimistic caption alongside a collage of three images. Haley, whom Israel has praised for standing up for Israel in the UN, landed in the country on Wednesday before departing on Friday. During her first trip to the region in her current role, the former governor of South Carolina met with Prime Minister Benjamin Netanyahu and President Reuven Rivlin in Jerusalem and Palestinian Authority Prime Minister Rami Hamdallah in Ramallah. During her three-day trip, Trump's ambassador to the UN also also toured Yad Vashem and Jerusalem's Old City, including the Western Wall. The ambassador also received a security briefing from military officials on Israel's northern border.Nikki Haley at the Western Wall (MARC ISRAEL SELLEM)Before leaving for Israel, Haley on Tuesday threatened that America may leave the United Nations Human Rights Council unless it stops its "chronic anti-Israel bias."