The artist explained that she is not trying to offend anyone by exploring sexuality so publicly, but rather looking to fracture social taboos on issues rarely discussed in Palestinian society. 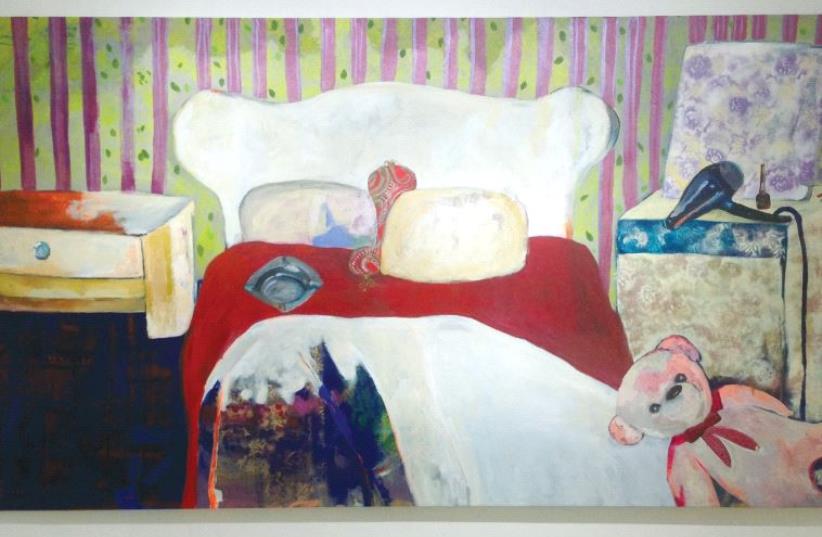 ‘INTIMATE SPACE XII,’ by Rana Samara. At first glance, many do not understand that Samara’s paintings depict intimate spaces. ‘You need to read the statement to understand,’ she said.
(photo credit: ELIYAHU KAMISHER)
Advertisement
The “Intimate Spaces” exhibition held at the Zawyeh Gallery in Ramallah is pushing the boundaries of Palestinian society by bringing intimate relations into the public sphere.The exhibit begins with a black-and-white video of the artist’s daughter sitting on a concrete wall and playfully opening and closing her legs.“She was wondering why her grandmother kept on telling her to close her legs,” explained Rana Samara, 30, a graduate of the Ramallah International Academy of Art. Samara’s first solo exhibition, discussing Palestinian sexuality, opened at the Zawyeh Gallery last week and runs until September 10.“This was the most controversial piece,” stated Samara, “because it brought my daughter into the exhibit... but I remember having the same questions as my daughter. Why do we have to close our legs? Is something going to fall out if they are left open?” she asked.Samara’s solo exhibition features depictions of spaces where intimacy takes place – bedrooms, balconies, even a taxi cab – are presented in large colorful acrylic portraits, combined with mixed media installations.There are no people in the paintings and to the untrained eye the underlying context may not reveal itself. But upon closer inspection there are hints; an earring scattered on the floor, an ashtray lying on the bed, and an unfurled role of toilet paper betray the paintings’ innocence.According to Samara, in Palestinian society talk of intimate relations, even between partners, rarely leaves the bedroom, and thus this exhibit has unsettled some viewers, not accustomed to a public airing of unspoken customs.The concept for the project began when Samara took a stroll through the densely populated Al-Amari refugee camp in Ramallah; she wondered how intimacy played out in such cramped spaces. “I started questioning, how did they sleep together?” she told The Jerusalem Post.Samara spent a year visiting women in Al-Amari camp and in other villages throughout the West Bank. She was able to enter their bedrooms and in these “intimate spaces” Samara would ask the women about their sexual life. “Building trust was not easy,” stated Samara, as issues of intimacy are not usually discussed so openly.It was through these discussions that Samara learned of special words used in Palestinian relationships. Like the Arabic word for Thursday, Khamees, which according to Samara holds a different meaning for married couples as Thursday is the day before the weekend and an established night for intimacy.“It’s a bit of a shock to some,” Ziad Anani the owner and curator of the Zawyeh Gallery told the Post, “She depicts spaces that we don’t usually see.”That is why Anani decided to feature Samara in her first solo exhibition. “It is a beautiful and strong concept,” said Anani.According to Anani, a number of the works presented in the exhibition, which range from $6,000 to $12,000, have already been scooped up by eager Palestinian and international collectors.Anani told the Post that Samara's work differs from many other Palestinian artists because she not only delves into taboos but developed her work through research and dialogue with community members. "[She] has the courage to explore issues that are considered taboos in the Palestinian society," he stated, "she bases her body of work on extensive research on the ground and makes sure to have the contribution of members of the community."For Samara, her art is tangential to the Israeli-Palestinian conflict. “It is related in an indirect way. Many of the women come from the refugee camps,” however, “women’s issues are a separate conflict, which is present everywhere in different ways,” she remarked.Samara seeks to bring sexuality, and women’s role in intimate relationships to the forefront of her work. In one installation Samara deals with the tradition of “virginity handkerchiefs” that is still practiced by some Palestinians. According to the custom, a bloodstained handkerchief is given to the mother of the groom, which proves that the bride was a virgin.Fifty such handkerchiefs are placed on the wall of the exhibit.Samara gave them to 50 men and women and asked them to express their opinion and understanding of the practice by drawing on the white fabric.Samara explained that she is not trying to offend anyone by exploring sexuality so publicly, but rather looking to fracture social taboos on central issues rarely discussed in Palestinian society. “I explain that this is the reality, this is the truth,” she said.