The National Council of Resistance of Iran exposed Iran's uranium enrichment plant at Natanz and a heavy water facility at Arak in 2002. 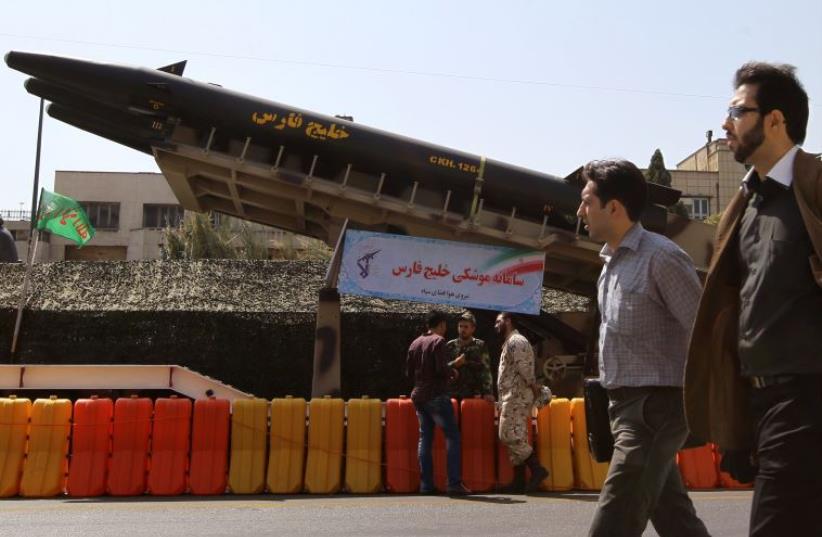 Iranian men walk past a long-range "Khalij Fars" anti-ship ballistic missile, displayed at a square in southern Tehran
(photo credit: AFP PHOTO)
Advertisement
An exiled Iranian opposition group said on Thursday a delegation of North Korean experts in nuclear warheads and ballistic missiles visited a military site near Tehran in April amid talks between world powers and Iran over its nuclear program.The dissident National Council of Resistance of Iran (NCRI) exposed Iran's uranium enrichment plant at Natanz and a heavy water facility at Arak in 2002. But analysts say it has a mixed track record and a clear political agenda. Iran says allegations of nuclear bomb research are baseless and forged by its enemies.Iran and six world powers are trying to meet a self-imposed June 30 deadline to reach a comprehensive deal, but issues remain including the monitoring and verification measures to ensure Iran could not pursue a clandestine nuclear weapons program.Citing information from sources inside Iran, including within Iran's Revolutionary Guards Corps, the Paris-based NCRI said the seven person North Korean Defense Ministry team were in Iran for the last week of April. It was the third time in 2015 that North Koreans had been to Iran and a nine person delegation was due to return in June, it said."The delegates included nuclear experts, nuclear warhead experts and experts in various elements of ballistic missiles including guidance systems," NCRI said.There have previously been unconfirmed reports of ties between the two countries on ballistic missile cooperation, although nothing specific in the nuclear field.The UN Panel of Experts that monitors compliance with sanctions on North Korea has reported in the past that Pyongyang and Tehran were regularly exchanging ballistic missile technology in violation of UN sanctions.The NCRI said the North Korean delegation was taken secretly to the Imam Khomenei complex, a site controlled by the Defense Ministry, east of Tehran. It gave detailed accounts of locations and who the officials met.It said the delegation dealt with the Center for Research and Design of New Aerospace Technology, a unit of nuclear weaponisation research and planning center called the Organization of Defensive Innovation and Research (SPND), which is under United States sanctions. NCRI said the unit researches and manufactures interior parts of nuclear warheads.Reuters could not independently verify the allegations."Tehran has shown no interest in giving up its drive to nuclear weapons. The weaponisation program is continuing and they have not slowed down the process," NCRI spokesman Shahin Gobadi said.UN watchdog the IAEA, which for years has been investigating alleged nuclear arms research by Tehran, declined to comment. Iranian officials declined to comment. North Korean officials were not available for comment.Several Western officials said they were not aware of a North Korean delegation traveling to Iran recently.North Korean and Iranian officials meet regularly in general diplomatic activity, although on April 23, Kim Yong Nam, North Korea's ceremonial head of state and Iranian President Hassan Rouhani held a rare meeting on the sidelines of the Asian-African summit in Jakarta.