Iran shocks US in volleyball match, but no women were there to see it

Iranian mascots carried held up a large US flag before the match as the US national anthem was played, drawing polite applause from the 12,000-strong crowd in Tehran's Azadi Indoor Stadium. 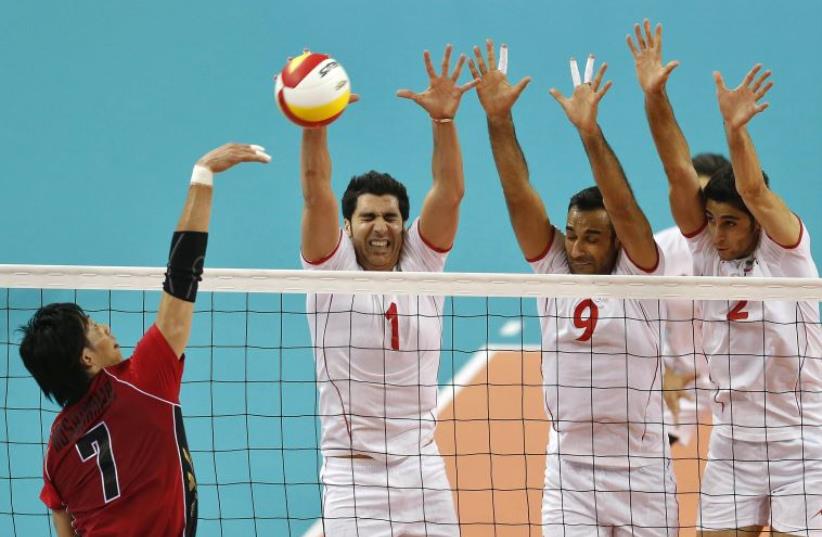 Japan's Yu Koshikawa spikes against Iran's (L-R) Shahram Mahmoudi Khatounabadi, Adel Gholami and Milad Ebadipour Gharahassanlou during the 17th Asian Games in Incheon
(photo credit: REUTERS)
Advertisement
Iran's volleyball team gave the United States a shock defeat in straight sets in Tehran on Friday evening, but not all Iranians were celebrating as officials upheld a ban on women entering the stadium.Iranian mascots carried held up a large US flag before the match as the US national anthem was played, drawing polite applause from the 12,000-strong crowd in Tehran's Azadi Indoor Stadium.The home team went on to win the first set 25-19, the second 29-27 and the third 25-20 as the United States team, which had won their previous three World League encounters with Iran, failed to settle into a rhythm. The two teams will play again on Sunday evening.Very few women could be seen in the stadium, suggesting that an official ban on women attending men's sports matches was still in force despite the efforts of Iranian activists. Some female match officials and foreign supporters could be seen.The match was Iran's first international volleyball fixture since a British-Iranian woman was pardoned in April after serving jail time for protesting the ban.Ghoncheh Ghavami's case sparked intense debate in Iran and widespread condemnation abroad, and there were conflicting messages in the run-up to the match about whether women would be allowed to attend.Vice-President for Women's Affairs Shahindokht Mowlaverdi indicated last week that a limited number of women would be allowed to attend, but the ISNA news agency on Wednesday reported that Iranian women would be banned, citing a source in Iran's Volleyball Federation.Some religious factions, which hold considerable power in the Islamic Republic, and conservative lawmakers including some women, oppose women attending men's sporting events and fear it will contribute to the breakdown of traditional society.President Hassan Rouhani, who won a landslide election victory in 2013 on a platform of relative moderation, has spoken about domestic social reform but has spent most of his political capital on promoting nuclear talks with world powers.Iran and six world powers, including the United States, have entered the last stretch of nuclear negotiations in Vienna, aiming to reach a deal by June 30 that would end a 12-year standoff.