Disagreements on sanctions, monitoring and other issues, Western envoys say. 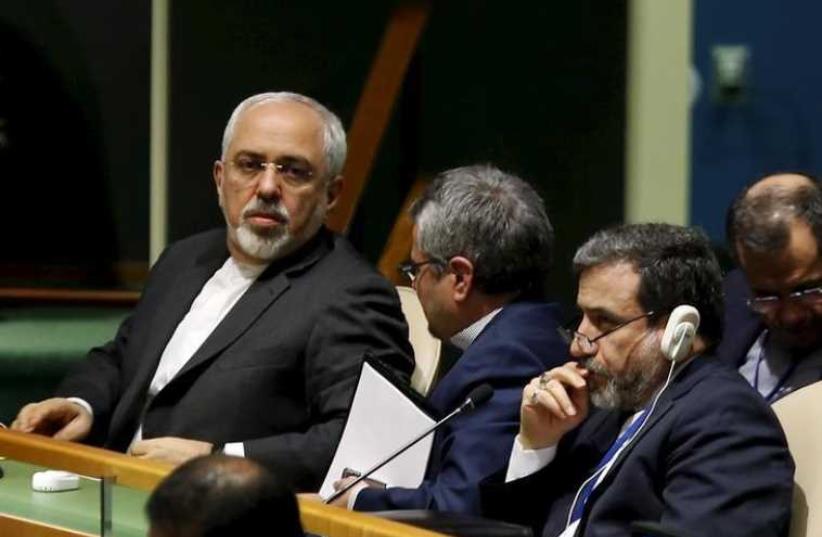 Iranian Foreign Minister Mohammad Javad Zarif (L) sits with the Iranian delegation before addressing the Opening Meeting of the 2015 Review Conference of the Parties to the Treaty on the Non-Proliferation of Nuclear Weapons (NPT) at United Nations headquarters in New York
(photo credit: REUTERS)
Advertisement
Iran and world powers are struggling to overcome deep divisions on two core sticking points in talks on a possible nuclear deal: reimposing UN sanctions if the Iranians violate the agreement and how Tehran can buy atomic technology, envoys said.Negotiators were wrapping up nearly a week of talks in New York on Tuesday, the latest round in 18 months of discussions aimed at clinching a long-term deal by June 30 to curb Iran's nuclear program in exchange for an end to sanctions.The current talks have been taking place on the sidelines of a conference on the nuclear Non-Proliferation Treaty. The negotiations between Iran, the United States, Britain, France, Germany, Russia, China and the European Union will resume in Vienna next week.
"The atmosphere of the talks was good and it is possible to reach the final deal by June 30," Deputy Foreign Minister Abbas Araqchi told Iranian state television.However, Western diplomats said on condition of anonymity that Iran and the six powers, who struck an interim agreement on April 2 in Lausanne, Switzerland, were far from a final deal because of disagreements on sanctions, monitoring and other issues."The UN Security Council sanctions issue is a difficult one," a Western diplomat told Reuters about the talks in New York. "It's going to take some time to resolve it and we have to resolve it."The discussions have revolved around a future Security Council resolution that would endorse a deal and render invalid all previous sanctions resolutions, while keeping UN bans on ballistic missiles, an arms embargo and some other restrictions.US and European Union negotiators want any easing of UN sanctions to be automatically reversible - negotiators call this a "snapback" - if Tehran fails to comply with the terms of an agreement. Russia and China traditionally dislike such automatic measures.The "snapback" is one of the most important issues for Western governments, who fear that, once any UN sanctions on Iran are suspended, it will be impossible to restore them because Russia and China would veto any such attempt."Without a snapback, there will be no nuclear deal," one Western diplomat told Reuters.Restoring US and EU sanctions is relatively easy, but that is not the case with UN sanctions.Western diplomats are trying to find a method under which Russia and China could not veto a snapback. Moscow, Beijing and Tehran also want to be certain that, if the Republicans win the US presidency in 2016, the United States will not be able to unilaterally force a snapback."We haven't found a mechanism that works for everyone yet," one diplomat said.Another difficult issue is the so-called "procurement channel" - a mechanism for approving Iranian purchases of sensitive atomic technology currently banned under UN sanctions. One idea under consideration is a vetting committee that would include Iran and the six powers. Tehran would have a say but not a veto, diplomats said.Iran says its nuclear program is entirely peaceful and rejects allegations from Western countries and their allies that it wants the capability to produce atomic weapons. It says all sanctions are illegal and works hard to circumvent them.A confidential report by a UN Panel of Experts, obtained by Reuters last week, said Britain had informed it of an active Iranian nuclear procurement network linked to two blacklisted companies.
Advertisement
Subscribe for our daily newsletter