Divisions between the two governments over Iran, however deep, will have to be put aside at some point soon. 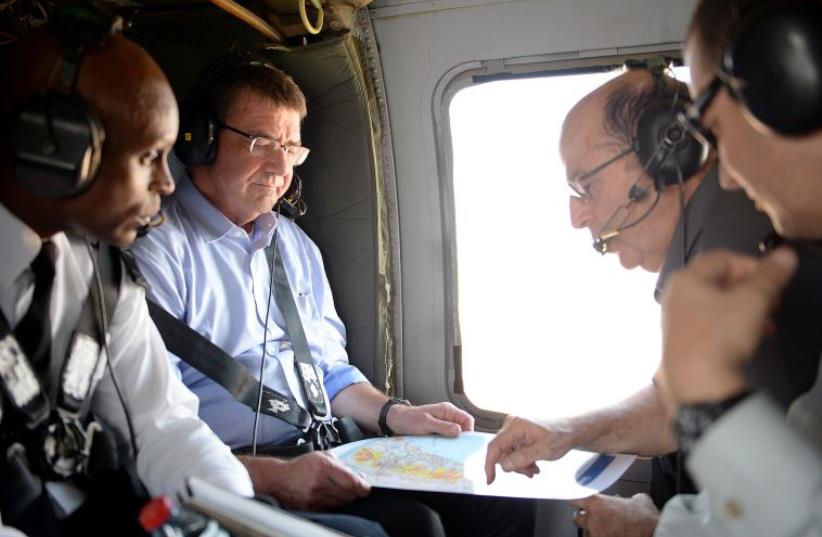 US Secretary of Defense Ash Carter (second from left) and Defense Minister Moshe Ya'alon look over the planned route of their visit to the Israel-Lebanon border
(photo credit: US DEPARTMENT OF DEFENSE)
Advertisement
Despite deep and genuine divisions over the Vienna agreement on Iran’s nuclear program, a paradox continues to define relations between the US and Israel. While diplomatic relations between the allies are at an all-time low, bilateral defense cooperation has reached an all-time high.This means that there is no reason to let the perpetual crisis that defines relations between US President Barack Obama’s administration and Prime Minister Benjamin Netanyahu’s government get in the way of tightening defense cooperation even further, which would only benefit both countries, and curb the destructive Iranian weapons trafficking to the Islamic Republic’s clients and partners.The US-led agreement with Iran over its nuclear program is, in the long-run, deeply harmful to Israeli strategic standing and national security.It legitimizes Iran as a nuclear threshold state due its sunset clause, and the agreement’s measures to curtail and inspect Iranian nuclear activities are inadequate.But Israel cannot stop the Obama administration from pushing forward on the agreement, and it is therefore best off pragmatically pursuing side agreements with Washington.These need not be limited only to the nuclear deal itself, but can also include vital agreements on how to contain Iran’s conventional regional arms trafficking and proxy warfare initiatives, which will be felt far sooner than any nuclear issue.For the first time since Israel’s founding, the United States military is carrying out operations – air strikes – in the failed state of Syria, targeting ISIS right in Israel’s backyard.The US also announced this week that it would provide air cover to the US-trained rebel forces, which were attacked immediately after entering Syria.It is safe to assume that the US’s military operations in the region are benefited in part by the highest quality intelligence assistance from Israel, according to international media reports.Israel’s intelligence assets have risen in value within the American defense community, leading to joint threat assessments and better cooperation.This reported cooperation could go much further than finding expression in a campaign against ISIS. It could be used to try to contain Iran as well.Israel’s satellites and intelligence agencies scour places like Syria and Iran for arms trafficking, and the movement of hostile military or terrorist forces.Israel has, until recently, been alone in monitoring Iranian weapons trafficking to terrorist organizations. The Saudis and their Sunni Arab allies have now also joined this effort, by placing a blockade around Yemen to prevent similar weapons shipments by Iran to the Shi’ite Houthi fighters.The US has indicated that it would be prepared to act on such intelligence in the future and play a larger role in intercepting Iranian arms smuggling. This would be a welcome development.“We are small, but the assets we bring to the US are very significant,” a senior Israeli defense official has said recently. The defense relationship is “mutually beneficial” to both sides, he stressed.There is little reason to doubt that in the coming years, Iran will step up its efforts to gain control of more Arab lands, attack pro-Western Middle Eastern states, and ensure that its radical clients and friends are armed to the teeth. The Vienna deal will free up hundreds of billions of dollars for the terrorist-backing regime in Tehran.Some of that money will obviously go to beefing up the conventional military capabilities, such as supplying advanced missiles, to members of the Iran-led axis.Hezbollah, the Assad regime, Islamic Jihad in Gaza, the Houthis in Yemen, and radical Shi’ite militias in Iraq will enjoy the economic and military fruits of the Vienna deal as they pursue their goals.Increased intelligence and defense cooperation with the US, as well as with the rational Sunni powers threatened by Iran’s activities, is required.Divisions between the two governments over Iran, however deep, will have to be put aside at some point soon, and a further expansion of the defense cooperation is vital, if a wealthier and more aggressive post-deal Iran, bent on arming its allies even further, is to be contained at all.