Inspections at the Parchin site, which is about 30 km (19 miles) southeast of Tehran, would by carried out by mixed IAEA and Iranian teams coupled with cameras overlooking the process, say diplomats. 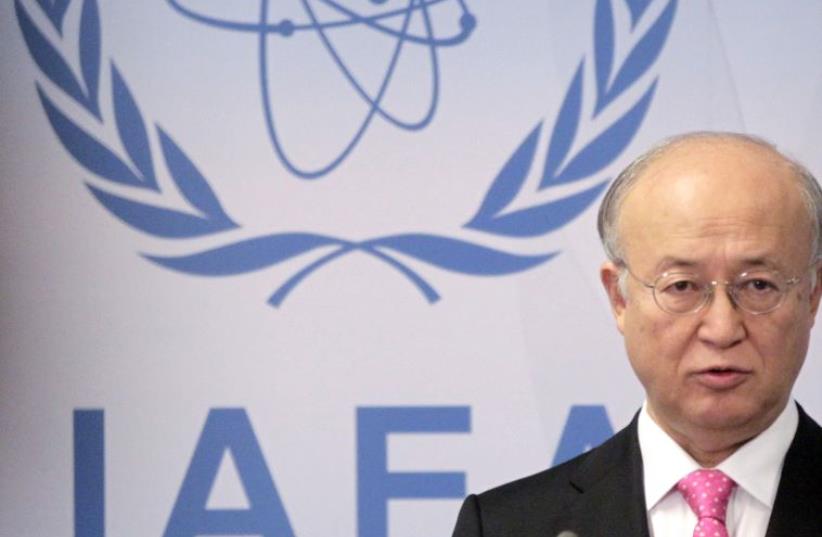 International Atomic Energy Agency (IAEA) Yukiya Amano attends a board of governors meeting at the United Nations headquarters in Vienna March 5, 2012. The United Nations nuclear watchdog chief said there were indications of "activities" taking place at an Iranian military site which his inspectors
(photo credit: REUTERS/HERWIG PRAMMER)
Advertisement
United Nations inspectors will be present with Iranian technicians as they take samples from a key military site, two Western diplomats said, undercutting an objection by US Republicans to the nuclear deal between Iran and world powers.The diplomats were familiar with details of a confidential arrangement between Iran and the UN nuclear watchdog for inspections at the Parchin site, where some countries suspect nuclear weapons-related tests may have taken place.Iran has denied that allegation, but agreed to accept comprehensive International Atomic Energy Agency (IAEA) inspections of its suspect sites as part of the historic July deal in exchange for an easing of international sanctions.An August report by the Associated Press, in its original version, said the agreement on Parchin suggested that IAEA inspectors would be barred from the site and would have to rely on information and environmental samples provided by Iranian technicians. The AP later published what it said was the text of an early draft of the agreement that remains unconfirmed.The report was seized on by Republicans in the US Congress as proof that President Barack Obama's administration gave in to Iran on the sensitive issue of inspections to check on Tehran's suspected ambition to build a nuclear bomb.Iran says its nuclear program is entirely peaceful.IAEA chief Yukiya Amano rejected the report as "a misrepresentation", though he declined to provide details of what some Republicans described as a "secret side deal" between Iran and the IAEA on Parchin. Amano said on Aug. 20 that the arrangements with Iran were technically sound.The signed agreement between Iran and the IAEA has not been disclosed publicly.But the Western diplomats told Reuters that while Iranians would be allowed to take the samples themselves, the agency's inspectors would be physically present and would have full access to their activity."There was a compromise so the Iranians could save face and the IAEA could ensure it carried out its inspections according to their strict requirements," said one of the diplomats. Inspections at the Parchin site, which is about 30 km (19 miles) southeast of Tehran, would by carried out by mixed IAEA and Iranian teams coupled with cameras overlooking and recording the process, the other diplomat said."The IAEA will be present when the Iranians take the samples (at Parchin). This approach to managed access is something that's fairly standard in the IAEA toolbox. Nothing to worry about really," the diplomat said."Unfortunately there have been distortions and inaccuracies in the media that made it look like Iran would simply inspect itself. That's not how it works," the diplomat added.Neither the IAEA nor Iran's UN missions in New York or Vienna had an immediate response to queries about the Parchin inspection arrangement. Reza Najafi, Iran's envoy to the IAEA, said on Thursday that Iran will not permit leaks of details about its arrangements with the IAEA. DEAL OPPONENTS SEIZED ON REPORTWithout IAEA confirmation that Iran is keeping promises enshrined in the landmark July 14 nuclear accord, Tehran will not be granted much-needed relief from sanctions.Under the deal, most sanctions on Iran will be lifted in exchange for curbs on its nuclear program that will remain in place for at least 10 years. According to data given to the IAEA by some member countries, Iran may have conducted hydrodynamic tests at Parchin in the past to assess how specific materials react under high pressure, such as in a nuclear explosion. The AP story revised its story several times. A corrected, three-paragraph version of the story currently on its web site says that Iran will be allowed to use its own experts to inspect Parchin, with no mention of the IAEA's role.Republicans repeatedly cited the AP report in recent weeks as they tried to muster enough votes kill the nuclear deal in Congress. Their efforts effectively failed on Thursday when Senate Democrats blocked a resolution disapproving of the pact, clearing the way for the deal's implementation.Republican Senator Susan Collins, who was one of very few Republicans some observers thought might support the nuclear deal, referred to the report in her Senate speech this week announcing she would vote against it."According to press reports, the Iranians themselves would also be responsible for photographs and environmental sampling of Parchin, a large military installation where nuclear work is suspected to have been conducted and may still be underway,” she said.Republican Senator and presidential candidate Lindsey Graham wrote to Secretary of State John Kerry requesting information on the AP report. "Allowing the Iranians to inspect their own nuclear sites, particularly a notorious military site, is like allowing the inmates to run the jail," said Graham. Under a roadmap accord Iran reached with the IAEA alongside the July 14 political agreement, the Islamic Republic is required to give the IAEA enough information about its past nuclear program to allow the Vienna-based watchdog to write a report on the issue by year-end.    Iran has long stonewalled an IAEA investigation into the possible military aspects of its past nuclear activities, relating mostly to the period before 2003, saying intelligence spurring the agency's investigation was fabricated.    "The IAEA has no fears that its requirements will be met," said the first diplomat. "That's not the issue. The real issue is whether Iran satisfies our concerns by year-end. At the moment they seem to be complying."