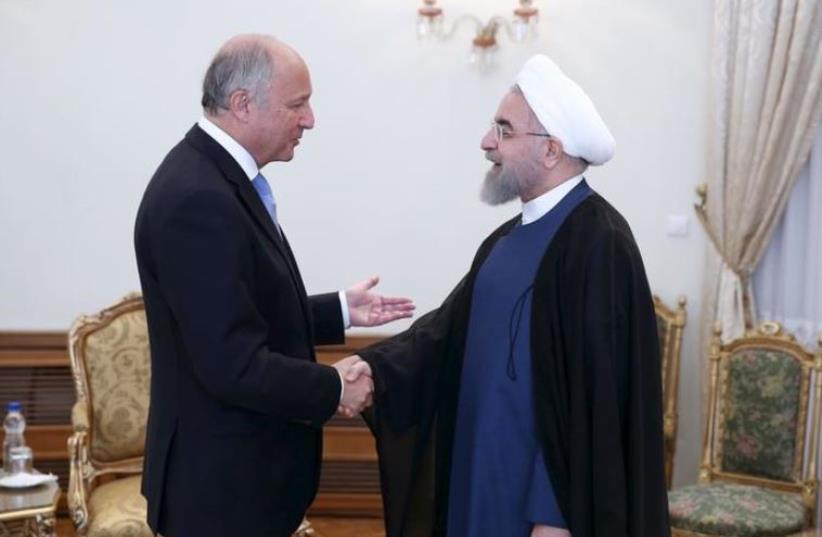 Iran's President Hassan Rouhani (R) welcomes French foreign minister Laurent Fabius in Tehran July 29, 2015.
(photo credit: REUTERS)
Advertisement
DUBAI - On the first visit to Iran for 12 years by a French foreign minister, Laurent Fabius conveyed an invitation from President Francois Hollande to Iran's President Hassan Rouhani to visit France in November, Iranian media said.If Rouhani accepts, he will be the first Iranian president to make a state visit to France since 1999.Fabius is seeking to smooth over any strains in the relationship created by France's hard line during negotiations that produced a historic nuclear agreement on July 14, and thereby create a climate conducive to stronger economic ties.
France"s Fabius visits Tehran, extends Paris invite to Rouhani
France hopes to secure business in Iran once Western sanctions are lifted under the nuclear deal, and Fabius said last week that his tough stance in last month's negotiations would not stand in the way of French commercial opportunities.Oil Minister Bijan Zanganeh was quoted by the Shana news agency after meeting Fabius as saying that Iran will enter into a new chapter of cooperation with French energy company Total .But French carmaker PSA Peugeot Citroen said its talks on a manufacturing venture with Iran's biggest carmaker are being hindered for just that reason.Fabius said earlier that cars, agriculture and the environment would be a particular focus of a high-level French economic and business delegation due to visit Iran in September.Carmakers Renault and Peugeot were major players in Iran's automotive sector before major new sanctions were introduced in 2011.The French minister met his Iranian counterpart Mohammad Javad Zarif and Zanganeh on his one-day visit and was due to meet Industry Minister Mohammad Reza Nematzadeh, and Masoumeh Ebtekar, head of the Environmental Protection Agency, Iran's state news agency IRNA said.Zarif said that the meeting had gone well. "We began good discussions to reach regional cooperation in the fight against terrorism and extremism," he said in a televised news conference.Opposition to closer ties comes from hardliners who cite France sending HIV-infected blood supplies to Iran in the 1980s, when Fabius was prime minister and Iran was at war with Iraq, and its relationship with Gulf Arab governments that are locked in a regional power struggle with Tehran.Images on social media showed protests against Fabius at Tehran's Mehrabad airport, and flyers depicting a bloody red carpet and the pledge: "We will not forgive or forget."