For decades, Germany was Iran's biggest trading partner in Europe. Last year, German exports to Iran rose to 2.4 billion euros in anticipation that the sanctions might be eased 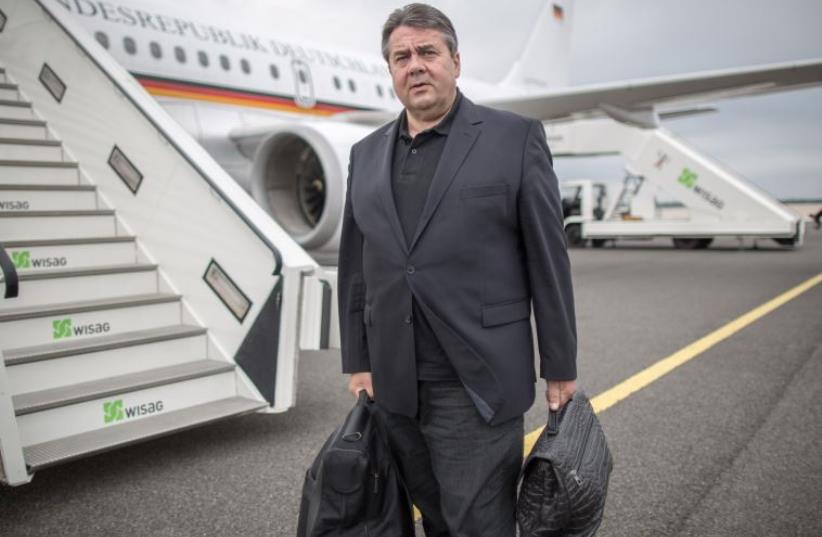 Sigmar Gabriel leaves for Iran
(photo credit: MICHAEL KAPPELER / DPA / AFP)
Advertisement
Germany and Iran moved tentatively on Monday towards reviving a once close trade relationship, anticipating the lifting of Western economic sanctions against Tehran following a landmark nuclear deal.Economy Minister Sigmar Gabriel, making the first top level German government visit to Tehran in 13 years, indicated that a ministerial-level meeting of a long dormant German-Iran economic commission would take place early next year in Tehran.Gabriel signaled the move at a meeting with Iranian Oil Minister Bijan Namdar Zangeneh during the visit, which is also the first to the country by a senior member of a Western government since the nuclear agreement last week.Gabriel, who also met President Hassan Rouhani and Foreign Minister Mohammad Javad Zarif, is traveling with a delegation of German industry representatives keen to move back into the Iranian market, particularly the lucrative energy sector.The trip is a delicate one for Gabriel, partly because of Germany's close ties with Israel, Iran's sworn enemy."We have talked about human rights here and I also made it clear that Israel's right to exist is an indispensable condition for Germany," Gabriel told German broadcaster ARD in an interview recorded in Tehran and aired on Monday evening."Of course, this has triggered opposition. But it can't be that we only come here for the money," Gabriel added.At a joint news conference earlier on Monday, Zarif did not touch on the issue of Israel directly, but said: "Of course we have differing political views. But we can talk about these differences of opinion."Israel opposed the deal under which sanctions imposed by the United States, European Union and United Nations will be lifted in exchange for Iran agreeing long-term curbs on a nuclear program.German exports to Iran hit 4.7 billion euros in 2010 but then more than halved by 2013 as the West tightened the sanctions imposed over Iran's nuclear program. However, the agreement between Iran and six world powers including Germany has opened the prospect that the sanctions will be removed.Iran once produced more oil than Saudi Arabia and was able to extract more than 6 million barrels per day in the 1970s, but its output has fallen below 4 million bpd over the past decade due to the sanctions and under-investment."There is no country in the world where petrochemicals are so easy to access and so inexpensive," Zangeneh said. "I hope that German and Iranian firms can find each other."For decades, Germany was Iran's biggest trading partner in Europe. Last year, German exports to Iran rose to 2.4 billion euros in anticipation that the sanctions might be eased, but German industry associations have said they could quadruple to 10 billion within a few years.German machinery, auto, chemicals, healthcare and renewable energy firms are likely to be the biggest beneficiaries of an opening up of the Iranian market.Wolfgang Buechele, chief executive of German industrial gases group Linde, saw the greatest demand in the oil and gas sector. "Especially German plant and mechanical engineers could benefit from it," Buechele told German magazine Der Spiegel, noting that German consumer goods manufacturers could benefit in a later stage.