For months, Iran had been stalling an IAEA investigation into the possible military aspects of its past nuclear activities. 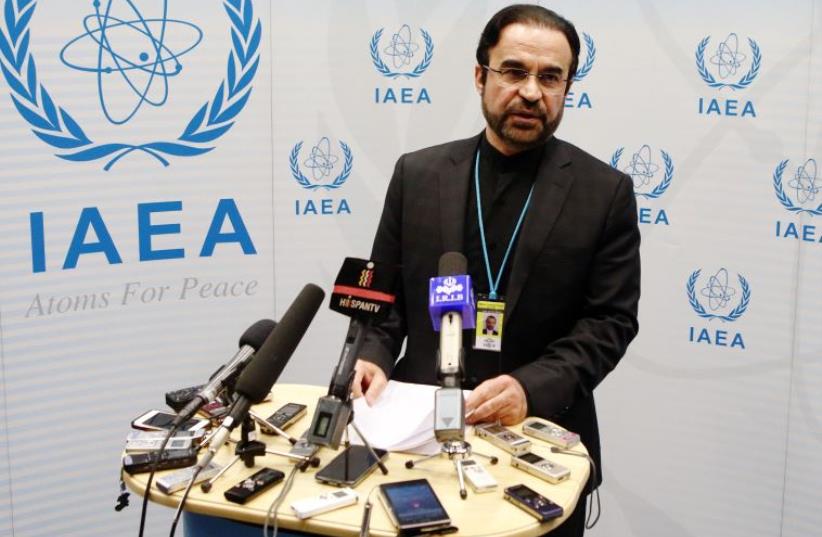 Iran's ambassador to the IAEA Reza Najafi addresses the media after a board of governors meeting at the body's headquarters in Vienna March 4, 2015.
(photo credit: REUTERS)
Advertisement
Iran has given the UN nuclear watchdog information regarding its atomic past, a milestone in potentially meeting a condition for sanctions relief under an accord reached with world powers last month.Alongside the July 14 agreement to curb its nuclear program in exchange for easing sanctions, Iran signed a deal with the International Atomic Energy Agency (IAEA) to resolve outstanding questions about the possible military dimensions (PMD) of its past nuclear activities."Iran today provided the IAEA with its explanation in writing and related documents as agreed in the road-map for the clarification of past and present outstanding issues regarding Iran's nuclear program," the IAEA said on Saturday, confirming Iran had met a deadline.For months, Iran had been stalling an IAEA investigation into the possible military aspects of its past nuclear activities, relating mostly to the period before 2003, saying the agency's data for its investigation was fabricated. The IAEA says it takes no information at face value.Under the road-map, the IAEA could ask Tehran to provide more clarification by Oct. 15 so that the watchdog can write a final PMD report by the end of the year.Full sanctions relief can only go ahead once the IAEA says Iran has complied not only with requests about its nuclear past but also with a range of measures to shrink its current atomic program.The agency has come under fire by US politicians for not disclosing its road-map agreement with Iran, which the UN body says is in line with its normal nuclear safeguards proceedings.Republican US Senator Lindsey Graham, who chairs a committee overseeing his country's financial contribution to the IAEA, has said he would push to stop such money if the agency does not publish its arrangements with Iran.