'We have to dispense with the idea that there are only two choices - the Iran deal or war,' the Arizona senator said. 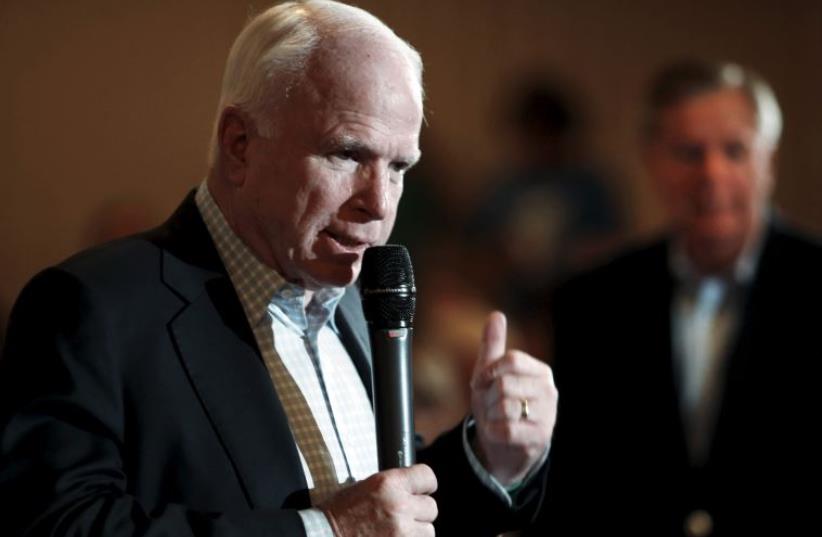 Arizona Senator and 2008 Republican presidential nominee John McCain speaks at a campaign town hall event for South Carolina Senator and U.S. Republican presidential candidate Lindsey Graham in Manchester, New Hampshire
(photo credit: REUTERS)
Advertisement
Despite a tense relationship between the US administration and the Israeli government, support for Israel among the American public is greater than it was five years ago, US Sen. John McCain (R-Arizona) said Tuesday.McCain, speaking in his office to a delegation of Israeli diplomatic reporters visiting Washington, said that he does not worry about the US affinity for Israel, “but rather about Iran feeling emboldened, having the ability to strike Israel.”McCain, chairman of the powerful Senate Armed Services Committee, said that he has been told that the while the US has the capabilities and military capacity to “take out” Iran’s nuclear facility, Israel could only “interrupt” it.The senator, a strong opponent to the deal, said he was baffled that two side-agreements between Iran and the International Atomic Energy Agency (IAEA) that deal with the matter of supervisory mechanics have been kept secret, even away from the eyes of the senators.He said that his constituents, whom he will hear from in August at town-hall meetings in his state, do not want him to approve an accord without knowing about “one of the most fundamental aspects of the agreement.”US President Barack Obama has created a construct where there are only two options, McCain said: either this deal or war. “Every witness I have heard,” McCain said of Senate hearings on the matter, “have said there are other options.We have to dispense with the idea that there are only two choices.Asked by The Jerusalem Post whether he thinks it was wise for Prime Minister Benjamin Netanyahu to not begin negotiations with the US over a “compensation” package for the deal at this time, McCain said he felt it was “unsavory” the way the administration offered the Persian Gulf countries enhanced arms as a result of the deal, saying this “made me feel a little uneasy.”“Offering arms is not going to assuage the concern the government of Israel is going to have about this agreement,” he said.Regarding whether he thinks Congress would vote against the deal, and then be able to muster the two-thirds support in each house to override a presidential veto, McCain said that “right now there is not sufficient votes to override the veto, but the dynamics are not in the administration’s favor, the trend lines are not in their favor.”Another senator who has been very critical of the deal, and is expected to oppose it, Sen. Robert Menendez (D - New Jersey), told the delegation that even if Congress could not get the votes necessary to override a veto, an initial rejection of the deal by Congress would have significance.Menendez said that, even if the accord moves forward because of a presidential veto, there are a “whole host of issues” that Congress could take up dealing with Iran, and that the stronger the vote against the accord, the easier it would be to move some of those initiatives forward.“For example, as the author of the Iran sanctions bill, I want to re-authorize them, so at least Iran will know that if they violate the dealt, there will be something to go back to,” he said. “Because ‘snap back’ means nothing if you are not snapping back to something of consequence.”He said that, under US law, the US-imposed sanctions will expire next year, and he wants to get them reauthorized. “I think the stronger the vote against the agreement, the more likely that will happen.I believe that the stronger the vote against, even if it does not rise to the level of an override, will strengthen the hand of the aftermath, which will be very important.”Menendez said that he found it “amazing” that the world powers sat at one side of the negotiating table (the US, Britain, France, Germany, China, Russia and the EU) and Iran sat on the other side of the table reeling from economic sanctions and falling oil prices, “and this is the best agreement you can get. It’s hard to understand that,” he said Republican Arkansas Sen.Tom Cotton, who sent an open letter to the Iranian leadership in March along with 46 other Senate colleagues warning that the next president could revoke a deal not ratified by Congress, said that the “momentum” in both the Senate and House was swinging toward those opposed to the deal.Cotton said that polls showed that public opinion is running 2-1 against the deal, because “people don’t see that ayatollahs and uranium go good together.”He said that the letter was intended to remind the Iranians that the agreement being negotiated “will not have a lasting and binding effect,” and that it was a “political agreement that any party could walk away from.”The journalists’ delegation was sponsored by the Ruderman Family foundation. This foundation sponsors programs aimed at enhancing Israeli understanding of the American Jewish community. The visit was initiated by the Israel Diplomatic Correspondent Association, and the meetings were set up with the assistance of the Jewish Federations of North America.