A new bill requires travelers who hold citizenship from, or have recently traveled to, Syria, Iraq, or any country listed as a state sponsor of terrorism, to acquire a visa to enter the US. 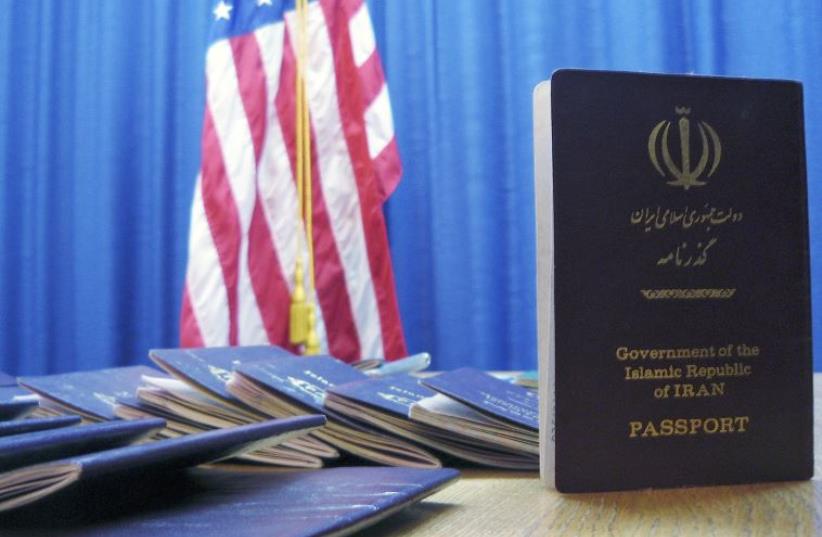 Iranian passports with U.S. visas are seen at the U.S. embassy in Bern, Switzerland, March 23, 2007
(photo credit: REUTERS)
Advertisement
An Iranian born BBC journalist was barred from boarding a flight to New York from London's Heathrow Airport Tuesday due to new US travel and visa regulations, according to reports by the New York Times.Rana Rahimpour, a journalist working for BBC’s Persian-language service in London planned to visit her brother living in the United States ahead of her nephew's sixth birthday but was turned away due to a bill recently signed into law that requires European Union citizens who hold dual citizenship from Iran, Iraq, Syria or Sudan, or have recently traveled to those countries, to obtain a visa ahead of traveling to the US.

3 days after lifting #Iran sanctions, #US denied #ESTA/visa waivers for me and another 2 #British citzns cos we have Iranian nationality too

According to Rahimpour, the US Embassy seemed unsure of whether or not the new law was already in effect and prevented her from traveling. The travel restrictions were not expected to take effect until April, she said.

@ranarahimpour Though most people think new #US travel restrictions not effective until April, #ESTA told me they are already in place.

The Visa Waiver Program (VWP) allows citizens of participating nations to travel to the US visa-free, with reciprocal privileges for its citizens but the Visa Waiver Improvement Act of 2015 created the exception to the rule.The measure was introduced after 130 people were killed in the Islamic State attacks in Paris on November 13, 2015. Several of the attackers had European passports, and some had traveled to Islamic State's territory in Syria. Listed by the State Department as a state sponsor of terrorism, Iranian citizens – including those living in Europe – now face additional travel hurdles. Iranians worldwide have reacted by characterizing the provision as discriminatory.Iran's Foreign Minister Mohammad Javad Zarif said following the passing of the bill that it was "absurd" that Iran should be included on the list."No Iranian nor anybody who visited Iran had anything to do with the tragedies that have taken place in Paris or in San Bernardino or anywhere else," he said in an interview with Middle East-focused website Al Monitor..Michael Wilner and Reuters contributed to this report.
Advertisement
Hot Opinion